WINNERS TAKE ALL: The Elite Charade of Changing the World
By Anand Giridharadas
Reviewed by Mark D. Walker 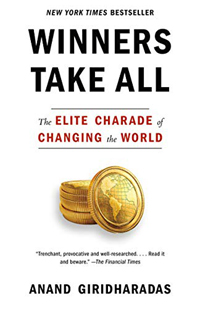 Based on a growing awareness of the increased income inequality in the U.S. and around the world, this insider’s investigation on how global elites promote “global change” at least partially has resulted in it being one of the most read books in the country at this time. The author also tells how this group ends up preserving the status quo and obscures the role these same “experts” play, causing some of the same problems they seek to solve. This former New York Times columnist introduces the reader to the inner sanctums of a new “gilded age” where the rich and powerful fight for justice without changing the social order and their own personal interests.

The backdrop of this story begins with the fortunes of the world’s billionaires growing double the rate of everyone else, to the point that the top 10 percent of humanity hold 90 percent of the planet’s wealth. Today, 62 billionaires’ income is equal to the bottom one-half of humanity’s 3.6 million people and has led to conspiracy theories of all types, as well as fake news. According to the author, our President has become a “salesman in chief” of this theory, “rife among plutocratic change agents, which asserts that what is best for powerful him is best for the powerless, too…” and promotes that theory that the private sector will replace the government in meeting the needs of the country’s population.

The author takes us on a confession from Emmett Carson, the Silicon Valley Community Foundation President, who was told to drop the usage of the “off-putting win-lose jargon of social justice” in favor of framing problems “in ways that make winners feel good.” This was contrary to Carson’s upbringing on the South Side of Chicago, the son of municipal workers, a black boy in a neighborhood statistically unkind to black boys. As he put it, “I spent twenty-five years working on social justice,” and the first twenty years I thought it was important to use the term “social justice. But, in the Silicon Valley, “some people say social justice is taking from the rich and giving to the poor,” while others say it is “giving to people who didn’t earn something,” so he began using the term “fairness.” Carson also understood that “if no one questioned the entrepreneurs’ fortunes and their personal status quo, they were willing to help. They liked to feel charitably useful…”

On an international level, the author analyses the work of TechnoServe, a consulting firm dedicated to fighting for the oppressed using the tools of business. He goes on to say that their protocols, “ironically, rushing in to shape the solution of problems that their methods were complicit in causing. Corporate types from the energy and financial industries were drafted into charitable projects to protect the world from climate change, even if their way of thinking about profit, as practiced in their day jobs, was a part of why climate change was happening…” Furthermore, these elite led social change resulting in business leaders saying they’re doing good even though their companies are part of the problem.

Giridharadas even grills former President Bill Clinton about his plutocratic benefactors and attends a cruise-ship conference where entrepreneurs celebrate their own self-interested magnanimity. He also leaves the reader with some challenging questions like, “should our gravest problems be solved by the unelected upper crust instead of the public institutions it erodes by lobbying and dodging taxes?” He also points toward an answer: Rather than rely on scraps from the winners, we must take on the grueling democratic work of building more robust, egalitarian institutions and truly changing the world. A call to action for elites and everyday citizens alike.

Anand Giridharadas is the author of The True American and India Calling. He was a foreign correspondent and columnist for The New York Times for over ten years, and has written for The Atlantic, The New Republic, and The New Yorker. He is an Aspen Institute fellow, an on-air political analyst for MSNBC, and a former McKinsey analyst. He teaches journalism at New York University and has spoken on the main stage of TED. He lives in Brooklyn, New York.