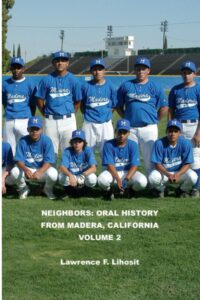 As one of the proofers of Volume 2, I was pleased to help Lorenzo with his latest of sixteen, soon to be seventeen books. I used his, “Peace Corps Experience: Write & Publish Your Memoir” to write my own, “Different Latitudes: My Life in the Peace Corps and Beyond.” He obviously knows the Central California area and history well, especially Madera, where he now lives. I totally agree with the publisher of “Madera Tribune,” “The best of its kind in print. Like Volume 1, the author offers real-life stories by citizens of Madera, California. It seems like they speak directly to us, seated at our kitchen table, waving their arms while laughing. This is a must read for those interested in the California Central Valley.”

The oral histories of the local population, which is almost 80% Hispanic, almost a third of which were born in Latin America and speak Spanish, is extremely timely given the misinformation and vilification of refugees from our neighbors to the South. The author also deals with local issues like the depletion of the local aquifer and the access to water. Definitely an important book for those interested in Central California and an excellent model for other authors who want to research and highlight communities in which they live. The assorted maps and graphics enhanced the understanding and appreciation of the area, as well.

Born in the suburbs of Chicago, Illinois the author moved to Arizona and graduated from Arizona State University. He was a Peace Corps volunteer in Honduras, 1975-1977 and traveled from Alaska to the Argentine Pampas. Recognition of his literary work includes a Congressional commendation for South of the Frontera: A Peace Corps Memoir, Years on and Other Travel Essays was awarded Best Travel Book by Peace Corps Writers. He and his wife raised two sons in Madera, California.

Walker was a Peace Corps volunteer in Guatemala and spent over forty years helping disadvantaged people in the developing world. His memoir, Different Latitudes: My Life in the Peace Corps and Beyond, was recognized by the Arizona Literary Association for Non-Fiction. He’s begun a second book tentatively entitled, The Old Gringo: A Self-Exiled Writer on the River of Emeralds, about one of the great, but little-known, travel writers of the 20th century, Moritz Thomsen.

More than 25 of his articles have been published in literary journals ranging from Ragazine, Literary Yard, Literary Travelers, Quail Bell, WorldView Magazine and the Scarlet Leaf Review.  A contributing writer for Revue Magazine, six of his articles have been published including, “Victor Montejo’s Dream for a Secure Maya Community,” in this month’s issue. Some of his sixty book reviews can be found in his column of the Arizona Authors’ Association Newsletter, “The Million Mile Walker: What We’re Reading and Why,” as well as the Midwest Review Book Shelf and GoodReads.  “Hugs not Walls, Returning the Children” was an essay winner for the “Arizona Authors Association” 2020 Annual Literary Awards competition. An article from his “Yin & Yang of Travel” series was recognized in the Solas Literary Awards for Best Travel Writing. Walker is a producer of a documentary, which was the focus of a feature article in the February 2020 issue of Revue Magazine, “A Documentary Film Production, Guatemala: Trouble in the Highlands.” He founded Million Mile Walker LLC in 2016.  His honors include the “Service Above Self” award from Rotary International. His wife and three children were born in Guatemala.