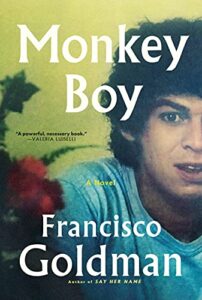 The Long Night of White Chickens was my introduction to Francisco Goldman, the author who I selected to review due to his connections to Guatemala, and I’ve been a fan ever since.  Though born in Boston, his mother is a Catholic Guatemalan, his father Jewish American, so his life started off with an intriguing combination of influences. The book is a tense, almost surrealistic detective story that opens windows on the Latin American reality of State Sponsored assassinations, marabunta youth gangs and organized crime.

His next book, Say Her Name, is an evocative story of love and loss between the author and the woman he fell in love with and married, writer Aura Estrada. Tragically, a month before their second wedding anniversary, Aura breaks her neck body surfing.  To deal with the loss and deep-seated feelings of guilt, Goldman chronicles his unspeakable loss, and the stages of grief when love and passion give way to inexplicable pain.

The author recalls memories from their university days in Mexico City, her studies at Columbia University, their early years together in New York City, and the exhilaration of youthful travels in Mexico and Europe. Humor and humility lighten the pain of the author’s overwhelming loss.

Covering the wars in Central America in the 1980s for Harper’s magazine led Goldman to write The Art of Political Murder: Who Killed the Bishop?, an extraordinary piece of investigative journalism that examines the assassination of Guatemalan Catholic Bishop Juan Jose Gerardi Conedera by the Guatemalan military.

Bishop Gerardi, Guatemala’s leading human rights activist, was bludgeoned to death in the parish garage, which is only a few hundred feet from the government’s most sophisticated security units and surveillance apparatus. The murder took place just two days after a groundbreaking church-sponsored report was released that implicated the military in the murders and disappearances of some 200,000 civilians. Under continuous threats and intimidation, Goldman doggedly tracks down and interviews witnesses that no other reporter or authority is able to access and reports first-hand some of the crucial developments in the case unfolding before him. The book was recently made into an HBO documentary in which Goldman, dramatically, adds critical context drawn from the months he spent investigating the murder.

This book is especially interesting because I’ve been working on a documentary that will explore the causes for the current migrant crisis: why so many Indigenous are fleeing Guatemala.  Our documentary, Trouble in the Highlands, covers many of the same issues that Goldman covered, including political corruption, military crimes, and the human rights abuses that Bishop Gerardi’s report exposed.

We are pleased that Francisco Goldman has expressed interest in being interviewed for our documentary. In addition to Goldman, we recently added new team members and updated the website; see: https://www.troubleinthehighlands.com/

Naturally, as soon as I learned that Goldman has a new book out that is largely “autobiographical”, I ordered Monkey Boy. I was especially interested in its designation as a “novel” rather than autobiography (as reviewers have pointed out).  In a revealing interview with Rachel Kushner for LitHub, he explains the importance of changing the surname of his lead character:

So, yeah, that “-man” to “-berg” makes a big difference. It’s a first decisive step into fiction, into turning myself into a character that‘s going to move and act and think within a fiction. It’s freeing myself from “myself,” from any duty to be faithful to the “known facts,” as I might be if I were writing an autobiography, even if many of the components I may be giving to “Frankie Goldberg” are, in fact, drawn from my own life.

Walking the fine line between literary fiction and autobiography gives the author flexibility to fill in the gaps with fictional material that enhances the story.

In the interview, he explains the key role that several women play in the story—his former Mexican wife, Aura, his mother, sister and grandmother:

There’s also my Guatemalan grandmother, Abuelita, definitely a strong and eccentric woman who I adored, and the women she sent up to Boston to help my mother with housework and looking after us so that she could go to college, eventually becoming a college Spanish professor.

In the novel, Frankie Goldberg visits two of those women.

As an adolescent, I had a talent for turning unrequited loves into friendships. Later my friendships with women didn’t require such painful beginnings. All my adult life, I’ve had strong male friendships, too, in the U.S., in Mexico and Central America. But in the U.S., most of my closest friends are women. I guess I just enjoy their conversation and sense of humor and way of being in the world more, and I think I also relate to them more.

Jewish Italian writer, Natalia Ginzburg, helped the author learn one important, revealing lesson on coming from a diverse, cultural background, “…how artificial the racial and ethnic categories we’re boxed into are, and that there’s no such things as being “half and half” anything, that we’re only fully what and who we are…”

The author reveals some interesting connections between his family and their friends to some important times in Guatemala’s history and shows how he can speculate what might have been by edging his commentary into the realm of fiction:

Did the United Fruit bilingual secretary, Lolita Ojito, ever filch a note or diary page in which Freud’s nephew had scribbled something like “If this is gonna work, boys, we gotta get the archbishop on board, and pronto” and bring it to her best friend in Our Lady’s Guild House, so that she could give it to the consul, who would pass it directly to President Arbenz, maybe in time to save the day? Doesn’t seem so. At any rate, the day was never saved. Questioning Mamita (the author’s mother) about the coup had turned out to be futile. If only I’d thought to ask her about it years ago. If only.

The speculation is even more compelling when the author reveals that his mother knows the ambassador, Cabot Lodge, and the upper crust Bostonian “Brahamins” who are employed by United Fruit Company. The author goes on to reveal the origins of his nickname in life, “Monkey Boy,” as well as behind the scenes details of the key witness, which leads to the conviction of at least some military personnel responsible for killing the Bishop.

This book is powerful on so many levels and provides additional insights into the author’s previous works. As Publishers Weekly correctly points out, “Captivating…Goldman’s direct, intimate writing alone is worth the price of admission.” And Kirkus’s starred review states, “The warmth and humanity of Goldman’s storytelling are impossible to resist.”

Francisco Goldman has published five novels and two books of non-fiction. His books have been published in 16 languages. Francisco Goldman has been a Guggenheim Fellow, a Cullman Center Fellow at the NY Public Library, and a Berlin Fellow at the American Academy. He is a member of the American Academy of Arts and Sciences. He also received a 2017 Barnes & Nobel Writers for Writers Prize, and PENMexico’s 2017 Award for Journalistic and Literary Excellence. He has written for The New Yorker, the New York Times Magazine, Harper’s, The Believer, and many other publications. He directs the Aura Estrada Prize (www.auraestradaprize.org.). He lives in Mexico City.