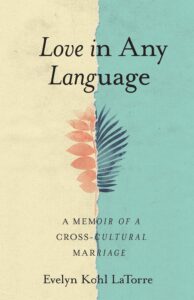 I have a soft spot for books written by tough, honest women who bring an inner sense of who they are and what’s different and unusual around them. I also appreciate simply told memoirs from fellow travelers, especially Returned Peace Corps Volunteers.

As I told the author, her timing couldn’t be better (the book drops later this month), since my Guatemalan wife and I are closing in on our 50th anniversary, making this an opportune time for me to appreciate, reflect and celebrate our matrimonial journey and what makes for a successful blended marriage.

I’ve already reviewed the author’s most recent book, Between Inca Wall, and according to the president of the National Association of Memoir Writers, Linda Joy Myers, “Evelyn LaTorre creates a masterful portrait of place―from the Montana hills to the peaks of Perú―and illustrates how place shapes us. The many lovely metaphors and descriptions throughout the book invite the reader to see through the eyes of an innocent girl as she discovers exotic, lively cultures; absorbs the colors, sounds, passion, and intensity of that new world; and allows it to change her life path.”

I could identify with the story of this twenty-one-year-old volunteer who was naïve about life and love. Although the author arrived in country as a volunteer ten years before I did (64-66), the circumstances were similar, and we both received training in Puerto Rico. Although her training initiated in Cornell University in New York and her field training in Puerto Rico was more focused on physical stamina, which included rappelling up a dam. The training must have been rigorous, as 23 of the initial 102 trainees dropped out.

In this book, the author describes her struggle to resist temptations as a good Catholic girl and dealing with her sexual desires with a local university student. I didn’t write much about “feelings” at all in my book, “Different Latitudes,” but by the end of this novel when the author realizes that she’s pregnant, I was turning the pages quickly to learn if they’d eventually get married.

The author’s wedding was arranged in just eight days in an ancient, colonial church in the colonial city of Cusco. The author describes how the wedding rings were purchased by her husband-to-be’s stepfather and the priest pronounced them man and wife. A relatively small group of Antonio’s family attended; none of the author’s friends participated due to the long distances to travel and her parents weren’t even aware of the ceremony until after the fact.

The rushed marriage ceremony resonated with me, as I had married my Guatemalan wife before leaving the Peace Corps—unbeknownst to them, of course. I was in a daze at the time and I remember the feeling of having the room filled with Ligia’s immediate family members (over 80 and I recognized 6…) and wondering what the future would bring. And my parents wouldn’t get the low- down until much later.

The author shares both the good and bad times along the way. Her experience giving birth to her son, virtually alone in Cusco, is most memorable,

But I never counted on waiting for the delivery by myself. Antonio hadn’t even seemed excited. My throat tightened. I’d married a guy who wouldn’t stay by his wife’s side during the birth of their first child. This wasn’t the way it happened in the movies, and I wanted that. Maybe this marriage had been a mistake.

Evelyn’s husband leaves his family and country for California where they encounter more than a few challenges, one of them due to a lengthy visit from her mother-in-law. For months, basic activities she’d done with Antonio, like going to the movies or concerts, were curtailed. And when he got off work, Antonio “took his mother to places he’s never invited me.” And her hurt feelings are reflected here:

Though I’d married Antonio, in part, because of how he revered his mother, neither my sons nor my husband treated me like someone to be watched over. Probably because I’d always been so independent, no one thought that I needed looking after. I wasn’t needy like Livia [the mother-in law]. However, sometimes I secretly yearned to be taken care of.

But many of those challenges are forgotten when they return to Peru together:

I embraced Arequipa and the affection shown us by Antonio’s family and friendly culture. My husband laughed and joked with his siblings. He put his arm around me, like he’d done often in our ten years together. I bubbled with lightness as I relaxed in the country where we’d first fallen in love. Time with his caring family revitalized us both.

The author dedicates an entire chapter to “Divorce” and brings up the long-debated question if matrimonies with Latina wives and male Peace Corps volunteers last longer, or in Evelyn’s case, a female PCV with a Latino husband. I’d always assumed that Latina/male volunteers were most likely to prosper since the Latinas are so focused on family and looking after the children although, in my case, she ended up working outside our home longer than I did. But the author tells a different story,

“Three couples with an Anglo wife and Latino husband, who’d spent the entirety of their married lives in a Latin American country, continued married for five decades like Antonio and me. Maybe we all knew from living in another country that there were more paths to happiness.” Evidently, Evelyn adhered to the 50% rule, “Though I might not always feel completely satisfied in love or work, as long as I was happy 50% of the time, I continued on my path forward.”

Not surprisingly, the author dedicates the book, “For my husband who left all he knew to journey with me through this adventure called life.”  Pedro Tabensky, PhD, author of Happiness Personhood, Community Purpose, provides an insightful critique, “Dr. Evelyn La Torre’s book is an intimate rendition of her life. It is an intricate book, replete with candid detail that aims to show us how living with The Other can enrich our lives and help us grow, even if the going is at times rough…”

Evelyn Kohl LaTorre holds a doctorate in multicultural education from the University of San Francisco and a master’s degree in social welfare from UC Berkeley. After serving in the Peace Corps in Peru, she worked as a bilingual school psychologist and school administrator in public education in California for thirty-two years. Now retired, Evelyn loves to travel; to date, she and her husband have traveled to nearly 100 countries together. Her writing has appeared in Conscious Connection Magazine, WorldView Magazine, The Delta Kappa Gamma Bulletin, the California Writers Club Literary Review, the Tri-City Voice, Dispatches, and Clever Magazine. You can view her stories and photos on her website, www.evelynlatorre.com. Evelyn currently resides in Fremont, CA.

Several of his articles have been published in Ragazine and WorldView Magazines, Literary Yard, Literary Travelers and Quail BELL, while another was recognized by the “Solas Literary Awards for Best Travel Writing.”  His reviews have been published by Revue Magazine, as well as Peace Corps Worldwide, and he has his own column in the Arizona Authors Association newsletter, “The Million Mile Walker Review: What We’re Reading and Why.”

His honors include the “Service Above Self” award from Rotary International. He’s a board member of “Advance Guatemala.”  His wife and three children were born in Guatemala. You can learn more at www.MillionMileWalker.com and follow him on Facebook at https://www.facebook.com/millionmilewalker/