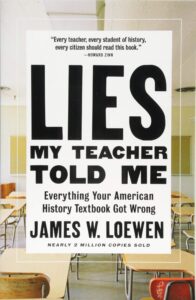 With the controversy around critical race theory, which is a cross-disciplinary intellectual and social movement of civil rights scholars and activities who seek to examine the intersection of race and law in the U.S., not to mention the recent assaults on boards of education across the nation by “concerned parents” to assure that their children weren’t confronted by a history which might make them feel “uncomfortable,” this seemed to be an ideal time to pick up this book.

Since its first publication in 1995, Lies My Teacher Told Me has become one of the most important history books of our time. Having sold nearly two million copies, the book also won an American Book Award and the Oliver Cromwell Cox Award for Distinguished Anti-Racist Scholarship and was heralded on the front page of the New York Times.

For this new edition, Loewen has added a new preface that shows how inadequate history courses in high school help produce adult Americans who think Donald Trump can solve their problems and calls out academic historians for abandoning the concept of truth in a misguided effort to be “objective.” Cynicism has replaced skepticism. Instead of truth and falsehood, there are facts and “alternative facts” to quote Conway. Fortunately, some investigative journalism is still happening.

What started out as a survey of the twelve leading American history textbooks has ended up being what the San Francisco Chronicle calls “an extremely convincing plea for truth in education.” In Lies My Teacher Told Me, James W. Loewen brings history alive in all its complexity and ambiguity and has been properly referred to as a “counter-textbook that retells the story of the American past.”

Thomas Baile’s comment in “The Journal of American History,” ‘Old myths never die—they just become embedded in the textbooks,’ certainly applies to the American Indians, which, according to Loewen “have been the most lied-about subset of our population. Their history has been told through white eyes.” I didn’t realize this until I’d graduated from high school and came across Dee Brown’s classic, Bury My Heart at Wounded Knee, which only touched the surface of the slanted narrative we’d been presented as students.

By downplaying Indian wars, textbooks help us forget that we wrested the continent from Native Americans. Not surprisingly, the author found that when asked to compile a list of U.S. wars, college students rarely think to include Indian wars, individually or as a whole.  And yet, Indian wars dominated our history from 1622 to 1815 and were of considerable importance until 1890, when they mostly disappeared from our national memory.

Personal visits, as opposed to textbooks, brought these realities closer to home for me. Visits to the Zuni Indian reservation in western New Mexico and a tour through the Canyon de Chelly National Monument in northeastern Arizona opened this little-known culture and history of Native Americans to me and my family.

Another chapter often missing in our textbooks is due to what the author refers to as, “The invisibility of Racism.” According to iconic documentarian, Ken Burns:

The black-white rift stands at the very center of American history. It is the great challenge to which all our deepest aspirations to freedom must rise. If we forget that—if we forget the great stain of slavery that stands at the heart of our country, our history, our experiment—we forget who we are, and we make the great rift deeper and wider.

Until the civil rights movement, American history textbooks agreed with Margaret Mitchell’s narrative in Gone with the Wind, which depicts slavery as not such a bad thing; that slavery was a social structure of harmony and grace that did no real harm and in which slaves were reasonably happy and well fed.

The author identifies yet another missing chapter in textbooks – influences of multinationals on U.S. foreign policy. Instead, they present our governmental policies as rational humanitarian responses to trying situations and do not seek to penetrate the surface of our government’s own explanations of its actions.

Among the least savory examples are various attempts by U.S officials and agencies to assassinate leaders or bring down governments of other countries. The author surveyed all eighteen textbooks to see how they treated six recent U.S. attempts to subvert foreign governments, which included our involvement in bringing down the elected government of Guatemala in 1954.

The author goes on to describe how in 1944, college students, urban workers and members of the middle class overthrew a dictatorship to form a democratic government. Over the next ten years, they extended the vote to the Indigenous populations and ended forced labor on coffee plantations, but all this came to an end in 1954 when the CIA threatened the government of Jacobo Árbenz with an armed invasion. The President had antagonized the United Fruit Company by proposing much-needed land reform and planning a highway and railroad, which would break their monopoly. The United States chose an obscure army colonel as the new President and the result was a repressive junta that treated its Indigenous majority brutally for another forty years.

The author chose an example from “The American Journey” as representative of the four of six textbooks which mention the event:

The Eisenhower administration also faced Communist challenges in Latin America. In 1954 the Central Intelligence Agency helped overthrow the govern of Jacobo Árbenz in Guatemala, which some American leaders feared was leaning toward communism.

The author reminds us that this fear of communism took place at the height of McCarthyism when the United States saw communism everywhere. As commentator Lewis Lapham pointed out, “When the duly elected Guatemalan president, Jacobo Árbenz, began to talk too much like a democrat, the United States accused him of communism.” And fifty years later, “The American Journey” still maintains the U.S. government’s McCathyist rhetoric. So do other textbooks if they mention Guatemala at all.

As you’d expect of any self-respecting Boomer, I turned to the chapter, “See No Evil: Choosing Not To Look At The War In Vietnam,” with great anticipation. The author quotes Martin Luther King Jr. to remind us of the impact of the war on the Vietnamese, “We have destroyed their two most cherished institutions: the family and the village. We have destroyed their land and their crops…We have corrupted their women and children and killed their men.”

He also explains his amazement when lecturing on the Vietnam War in the 1980s but got blank looks. In 1989 he gave his students a quiz with the open-ended question, “Who was found in the war in Vietnam?” Almost a fourth of his students said the combatants were North and South Korea. To his chagrin, many recent high school graduates knew more about the War of 1812 than about the Vietnam War.

The author anticipates an explanation of this myopic view of history in his preface by revealing the masterminds of the Vietnam war: Lyndon Johnson and Richard Nixon, who tried to manipulate the media. Most notoriously, about the Gulf of Tonkin incident, when they got newspapers to report an enemy ship movement that didn’t exist. Their manipulation undermined the public’s confidence in the media after the truth came out. They both tried to suppress the media, which again undermined the media after the truth came out. And “When that did not work, both, along with Nixon’s vice president, Spiro Agnew, attacked the media as biased, wrong, and anti-American.”

I agree with reviewer Howard Zinn when he says, “Every teacher, every student of history, every citizen should read this book. It is both a refreshing antidote to what has passed for history in our educational system and a one-volume education in itself.” And “As a history teacher, this book really made me critically examine what I teach and how I teach it. There are lots of good and thought-provoking ideas in here, as well as suggestions and recommendations for those who teach history. This text is a must-read for anyone teaching history to our teens today.”

These are just some of the reasons why this book ranks #2 for Historic Study & Teaching”, #3 for “Historiography & #3 for “History of Education.”

(1942–2021) The author was the bestselling and award-winning author of Lies My Teacher Told Me, Lies Across America, Lies My Teacher Told Me About Christopher Columbus, Sundown Towns, and Lies My Teacher Told Me: Young Readers’ Edition (all from The New Press). He also wrote Teaching What Really Happened and The Mississippi Chinese: Between Black and White and edited The Confederate and Neo-Confederate Reader. He won the American Book Award, the Oliver Cromwell Cox Award for Distinguished Anti-Racist Scholarship, the Spirit of America Award from the National Council for the Social Studies, and the Gustavus Myers Outstanding Book Award.

Several of his articles have been published in Ragazine and WorldView Magazines, Literary Yard, Scarlet Leaf Review and Quail BELL, while another was recognized by the “Solas Literary Award for Best Travel Writing.” Two of his essays were winners at the Arizona Authors Association Literary Competition.  He’s a contributing writer for “Revue Magazine” and the “Literary Traveler.” He has a column in the Arizona Authors Association newsletter, “The Million Mile Walker Review: What We’re Reading and Why.”