House Made of Dawn
By N. Scott Momaday
Reviewed by Mark D. Walker 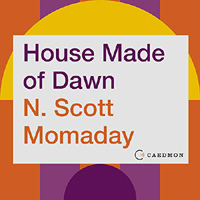 I learned about the author on an “American Masters” documentary, “Words from a Bear” that portrayed him as a voice of Native American Renaissance in art and literature, which led to a breakthrough of Native American literature into the mainstream. Like many Americans, my awareness of the Native American was raised by historian Dee Brown’s 1970 best-selling book, “Bury my Heart at Wounded Knee,” which told about the massacre of several hundred Lakota Indians (mostly women and children) by soldiers of the U.S. Army. The author was brought up around places I’d lived and worked in Oklahoma, New Mexico and Arizona, and this book had received a Pulitzer Prize for Literature.

The main character, Abel, has come home to New Mexico from war only to find himself caught between two worlds. The one world is modern and industrial, claiming his soul and leading him into a destructive, compulsive cycle of depravity and despair. The author expresses a wariness of the white man’s world and language,

On every side of him, there are words by the millions, an unending succession of pamphlets and papers, letters and books, bills and bulletins, commentaries and conversations. He has diluted and multiplied the Word, and words have begun to close in upon him. He is sated and insensitive; his regard for language—for the World itself—as an instrument of creation has diminished nearly to the point of no return. It may be that he will perish by the Word.

Alcoholism is often a part of the despair Abel experiences,

He had gone out the first and second days and got drunk. He wanted to go out on the third, but he had no money and it was bitter cold and he was sick and in pain. He had been there six days at dawn, listening to his grandfather’s voice. He heard it now, but it had no meaning. The random words fell together and made no sense.

In contrast, his grandfather would orient him to the rhythm of the seasons, the harsh beauty of the Southwest, and the ancient rites and traditions of his people.

These things he told his grandsons carefully, slowly and at length, because they were old and true, and they could be lost forever as easily as one generation is lost to the next, as easily as on old man might lose his voice….And he knew they knew, (his grandsons) and he took them with him to the fields and they cut open the earth and touched the corn and ate sweet melons in the sun.

Considered by some as the “dean” of Native American writers, he was proficient in fiction, poetry, painting and printmaking. He’s used his familiarity with Native American life and legend with the modern world, building a bridge between the two. He described this as follows,

“I lived on the Navajo reservation when I was little. And I lived on two of the Apache reservations, and lived at the Pueblo of Jemez (west of Santa Fe, New Mexico) for the longest period of time…I had a Pan-Indian experience as a child, even before I knew what that term meant.”

In an interview in the American Poetry Review, he recalls, “I saw people who were deeply involved in their traditional life, in the memories of their blood. They had, as far as I could see, a certain strength and beauty that I find missing in the modern world at large. I like to celebrate that involvement in my writing.”

In 1958, Momaday received his BA degree from the University of New Mexico and entered the graduate program at Stanford University, where the celebrated critic, poet and scholar, Yvor Winters, had first selected Momaday as the year’s only creative writing fellow in poetry and would become the aspiring poet’s advisor. He went on to get his PhD, and in 1962, he received the Academy of American Poets prize for his poem, “The Bear.”

He’d become an associate professor of English and comparative literature at the University of California, Berkeley where he designed a graduate Indian studies program and developed a course in Indian oral tradition, which has been taught ever since at Berkeley, Stanford and the University of Arizona. For twenty-nine years, he’d be a consultant to the National Endowment for the Humanities and the National Endowment for the Arts.

The New York Times Book Review found this book, “as subtly wrought as a piece of Navajo silverware.” And I’d agree with the critique of this book from The Paris Review, “both a masterpiece about the universal human condition and a masterpiece of Native American literature.”