The White Rose” by B. Traven
Reviewed by Mark D. Walker 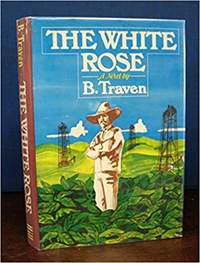 B. Traven is a masterful storyteller who injects his worldview and philosophy, which focuses on the plight of the poor, especially the indigenous, rural population in Latin America, Asia and Africa into his novels. He’s written twelve novels, one non-fiction publication and several short stories, in which the sensational and adventurous subjects combine with a critical attitude towards capitalism. Although I’d heard of his best-known work, “The Treasure of the Sierra Madre”, I had no idea who the author was, and after some investigation learned of a good deal of mystery about his identify. He expresses the reasoning for wanting to remain detached from his work with this statement, “The creative person should have no other biography than his works”; however, that sentiment has been questioned by many.

The story is about a U.S. oil company’s quest to expand their drilling rights in rural Mexico, at any cost, and their response when a local Indian leader tried to sidetrack their efforts in order to maintain the local values and culture. Here’s how the author describes a clash of two world-views:

And what Mr. Collins (the oil executive) did not learn about Mexico and the Mexican people from newspapers and periodicals, he got from anecdotes told in the hotel to kill time, stories that hadn’t been fabricated in Mexico but were taken from “Life” and “Judge” and other American humor magazines.

The author goes on to masterfully describe this different world-view as follows, “And when anyone maintained that there was something—material or spiritual—worth more to him than money, worth more even than all the money in the world, (in this case—the villagers’ access and control over their own land), Collins smelled a trick, a ruse to extract a greater sum.”

Some of B. Traven’s writings have been described as “proletarian adventure novels” that tell of exotic travels, outlaw adventures with Indians with motifs found in Jack London novels. But unlike Western fiction, Traven’s books are characterized not only by a detailed description of the social environment and their protagonists. but also a world perspective of the oppressed and exploited. Because of this, many of his novels are call Jungle novels”, a series of six novels that describe the life of Mexican Indians in Chiapas in the early 20th century, who are forced to work under inhumane conditions clearing mahogany in the jungle, all of which results in the outbreak of the Mexican Revolution.

Although the author focuses on the plight of the poor and downtrodden, his portrayal of the oil executives is by no means “flat” or one dimensional. He actually shows how Collins, the wealthy oil president, is trapped in a cycle of overconsumption, which forces him to pursue ever bigger business ventures in order to stave off personal insecurity and financial ruin.

His own contradictory and confusing personal biography adds to the richness of his writing. B. Traven (Bruno Traven, according to some observers) was the pen name of a presumably German novelist, whose real name, nationality, date and place of birth and details of biography are all subject to dispute. We do know that he was born in Eastern Europe but lived much of his adult life in Mexico. He submitted his works through a “representative” from Mexico for publication in Europe listing a Mexican post office box in Tamaulipas, Mexico as his address. Neither the European nor American publishers of the writer ever met him personally. Questions even arose about the identity of the “agent” who represented him in the filming of the “The Treasure of the Sierra Madre” as actually being the author himself.

Over the years, he’d use a number of different names and personalities, such as Feige and Ret Marut, colored with fascinating stories of personal descent until they became a rich mixture of self-discovery, self-invention, and performance and, in the end, a masquerade. His hide-and-seek manners evidently became progressively obsessive over the years. Most observers agree that Traven was in fact Ret Marut, a German stage actor and anarchist, who supposedly left Europe for Mexico around 1924. Researchers further argue that Marut/Traven’s real name was Otto Feige, and that he was born in Schwiebus in Brandenbuerg in Świebodzin, Poland.

Both the author’s writing and his mysterious biography are fascinating. His books don’t hammer his political perspective and they reflect the challenges facing rural, indigenous populations around the world. He has a distinct writing style and his stories are based on reality, no matter how unseemly, making this book an excellent read on many levels.