Henry: A Polish Swimmer’s True Story of Friendship from Auschwitz to America by Katrina Shawver 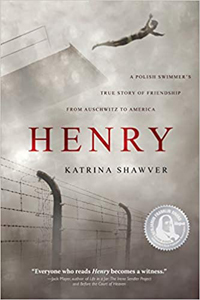 Henry tells his story as a champion swimmer and swimming coach, interrupted by three years of imprisonment in Auschwitz and Buchenwald as a Polish political prisoner. He had an exceptional memory and an impressive cache of original documents and photos. I ran across this fascinating story when I met the author, Katrina, at an Arizona Authors Association event. She was a local journalist who’d written hundreds of newspaper columns for the Arizona Republic. She met eighty-five-year-old Henry Zguda in 2002 from a tip she received of a good story, which resulted in a fifteen-year journey, writing between raising three children, but she promised Henry and his wife she’d tell their story – and what a historic journey it was. During those fifteen years she actually visited Poland to verify much of Henry’s story and used a host of translators to assure the authenticity of this amazing life.

Henry’s story provides a broader perspective on the Holocaust and reminded me that no single class of people was safe from Hitler’s reach or imprisonment, and that no country suffered more from Hitler and Stalin than Poland. The author puts Henry’s story into a historic context that is astoundingly brutal.

“On October 7, 1941, the first major transport of Soviet prisoners of war arrived at Auschwitz, and more transports of Soviet POWs came shortly thereafter. Construction on Birkenau began the next day. All in all, 13,775 Soviets were brought to camp and immediately put to work building Birkenau. They lived without shelter, in the cold and mud. Nearly all perished…”

The scene of the Buchenwald crematorium was most grizzly, “Get outta here,” the guards ordered me, swinging their rifles at me. They sent me back to carry the cadavers. We had to continuously transport the dead. At one point, I tripped and fell with these bodies on top of me. My knee rammed into the cement stairs. The SS saw me go down and came over waving at me.

Henry was finally a free man in April 1945 when U.S. troops liberated Dachau, nearly three years after his arrest, ending years of “starvation, imprisonment, and witnessing so much death…”

Henry escapes Europe for the U.S. and will never forget the moment that people often ignore in this day of negative news about immigrants, “Leon and I arrive finally to the New York port. We waved to the Statue of Liberty as we sailed by her. We disembark from the S.S. America. The ship unloads our four valises – two each – and we just stood there on the pier with the water behind us. We are foreign. We stand on the pier with our backs to the ocean, facing our new country. Everyone around us is “Hi, how are you?! And hugs and smiles. All I hear is garbled nonsense—we don’t speak any English.”

The book is packed with 70 original photos and rare German documents and ends with “Topics for Discussion,” which is important in this day and age of misinformation about the Holocaust and immigration in general. The amazing true story takes on a sad but true historic journey and shows how one man survived and then found the love of his life.