The Art of Political Murder: Who Killed the Bishop?
By Francisco Goldman
Reviewed by Mark D. Walker 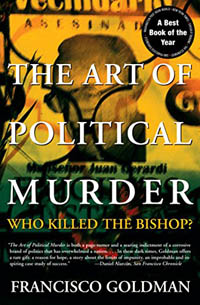 “The Long Night of White Chickens” was my introduction to the author and I’ve been a fan ever since. His mother is a Catholic Guatemalan, his father Jewish American, and he was born in Boston, so he started off with a very interesting combination of influences. The book is a tense, almost surrealistic detective story which opens windows on the Latin American reality of State Sponsored assassinations, mara youth gangs and organized crime.

The author’s insights come out of his coverage of the wars in Central America in the 1980s as a contributing editor to Harper’s magazine. His book is a non-fiction account of the assassination of Guatemalan Catholic Bishop Juan Jose Gerardi Conedera by the Guatemalan military. The book was an expansion of an article in the New Yorker, plus seven years of painstaking and often dangerous journalistic investigation.

The Bishop was Guatemala’s leading human rights activist and was bludgeoned to death in his garage, which is only a few hundred feet from the government’s most sophisticated security units and surveillance apparatus. All of this took place two days after a groundbreaking church-sponsored report implicating the military in the murders and disappearances of some 200,000 civilians. The author tells how the church formed an investigative team comprised of secular young men in their twenties known as “Los Intocables” (the Untouchables) due to the expected lack of interest of police investigators, not to mention the inability of the existing legal system to solve what was known in Guatemala as “The Crime of the Century.” In what would be his first non-fiction book, the author managed to reach and interview witnesses that no other reporter or authority was able to access and witnessed first-hand some of the crucial developments in the case unfolding before him.

The author’s painstaking research would reveal that in 1980 Gerardi would become Bishop of the Quiche diocese, which was the country’s most populous Indian province, and barely escaped an assassination attempt himself. One of his biggest mistakes, according to the author, was to close the diocese due to the threats of attack. Before the civil war ended, “…more priests, nuns, and religious workers would be “martyred” by violence …than in any other diocese in the Americas.”

The author’s investigation also reveals the involvement of the U.S. in creating some of the circumstances that led to the bloody civil war which…”was a consequence of a coup re-engineered by the CIA in 1954 against Jacobo Arbenz, only the second democratically elected president in Guatemala’s history…” A reality confirmed from a remarkable apology by President Clinton on a visit to Guatemala in 1999 when he sat next to the stony faced President Arzu, and said: “It is important that I state clearly that support for military forces or intelligence units that engaged in violent and widespread repression of the kind described in the report was wrong…and the United States must not repeat that mistake.”

The author takes the reader through the byzantine legal system in Guatemala, which included constant threats against the lives of Judges (several of whom had to leave the country in fear of their lives) and witnesses. Many of the rulings on the case were flawed, at best, as was the case with the Fourth Court of Appeals where important witness records were not even requested by the appellate judges and “Judge Wilewaldo Contreras’s court had issued a precooked ruling.”

Finally, in January of 2006, the author would receive a “confirmation” by email that the Supreme Court had upheld the convictions and twenty-year sentences for several of the perpetrators, the Limas. Although the author tells of his feelings of astonishment and relief at hearing the news, the attempts to limit and delay the conviction would go on until April of 2007 when a new judge took over as president of the Constitutional Court, and within days—on April 25th, the day before the ninth anniversary of the murder of Bishop Gerardi—the Public Ministry was notified that the guilty verdicts against the Limas and Father Mario had finally been upheld.

The author provides an afterword, a list of appearances of the different characters in the story and a chronology of events, as well as source notes and an index to what is a well written, dramatic piece of Guatemalan history, which says a lot about the chaos and issues forcing so many to flee their homes more than ten years later. The author has written for the New Yorker, the New York Times Magazine, and Harper’s to mention a few publications. He divides his time between Brooklyn and Mexico City and teaches creative writing and literature at Trinity College.