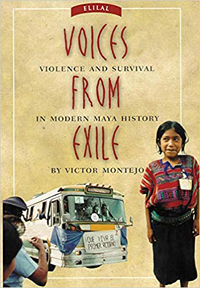 As a lifelong learner of Guatemala and its history, I came across this author through an earlier book I’d read in Spanish, “The Adventures of Mister Puttison and the Mayas.” Then, just this year I came across this book while researching a documentary on migration entitled “Guatemala: Trouble in the Highlands.” While the earlier book was satirical, and related to cross-cultural norms and conflicts, this book tells the tragic story of Mayans being forced from their land during the “Civil War” of the 1980s. After copious research and interviews of the Maya refugees, the author reported that over 46,000 refugees were forced to flee to southern Mexico due to the violence and human rights abuses of the Guatemalan army.

A Mayan ex-patriate and a U.S. trained anthropologist, the author interviews and gives voice to those Mayan villagers who were forced to remain silent for so long because of fears of reprisal and violence. The author combines autobiography (he is from the region – and was forced to leave with his family due to fears of reprisals from the Guatemalan government), history, political analysis and a powerful testimonial narrative to explore this state of terror and its inescapable human cost (an estimated 200,000 Guatemalans—most from the highlands, lost their lives during the civil war).

Although this book was written over twenty years ago, it is both timely and compelling, given that the author is from Jacaltenango in Huehuetenango in the highlands of Guatemala and was a first-hand eyewitness to the violence that eventually was forced to leave the country with his family.

The author provides the historic backdrop to the refugees fleeing their country, which includes the long-standing tradition of forced labor of the Mayan population, as well as the long series of uprisings, including one in Totonicapan in 1820 that moved Guatemala closer to its independent status from Spain. But, as the author points out, even independence didn’t change the conditions of the Maya.

The army bases in the region were the focal point of horrible events in 1981, “Helicopters would arrive with gagged men transported in bags, brought in from distant communities to be tortured and executed inside the military barracks. Local townspeople could hear the screaming of men being tortured late at night. These nocturnal screams and the almost constant noise of submachine gun fire instilled panic among the local people. Skulls and dismembered parts of human bodies were found on the outskirts of towns, and dogs and buzzards found over the carrion…”

But the most destructive impact on the Mayan culture was the civil patrols, a pervasive system of control. By 1984 “the system incorporated nearly one million men and included virtually all male Indians in the western highlands between the ages of sixteen and sixty.” So these local “authorities” would take any conflicts in the village to a military officer for resolution, allowing the military to control every aspect of village life.

The author points out the key role of language and Maya weaving and traditional dress to maintain their cultural identity. But as the violence against them escalated and they were forced into camps in Mexico, they felt obligated not to speak their language nor utilize their traditional garb in order to avoid the prejudices leveled on them by local authorities.

Although the Catholic Church was not always respectful of the Maya culture, a more liberal sector evolved to promote community projects and cooperatives. But following the 1980s, after the coup that brought Rios Montt to power, evangelical missionaries were welcomed into Guatemala and Protestant churches proliferated in the highlands. This included conservative Pentecostal sects that accused the Indians of being pagans and living in darkness, adding to the pressure on the Maya culture.

Initially, the Maya refugees were unable to return to their country because of the ongoing violence and prejudices that awaited them. When they were able to return, they found their lands had been taken. Finally, in the mid-1980s, Costa Rica’s President, Oscar Arias, led a series of discussions, which resulted in the Central American Peace Accord signed in August of 1987 by the Presidents of all Central American countries. Finally, almost 2,500 returnees were accompanied by 240 international observers, which included the author.

This important chapter in Guatemalan history sets the backdrop for the ongoing prejudices and violence perpetrated on the Mayas, which has continued to this time. The author includes a number of maps, graphs and photos to bring this story alive.

The anthropologist and the other —

Toward a Maya history of Guatemala —

The advent of violence in the Kuchumatan Highlands —

Military control of the highlands —

The journey to Mexico —

Life in the refugee camps —

Ethnic relations and cultural revival in the refugee camps —

Songs and poetry from the camps —

From the present to the future.

The author received his Ph.D. in Anthropology in 1993 from the University of Connecticut. Victor Montejo was a Professor of Native American Studies at the University of California, Davis. His academic interest focuses on indigenous people of Mesoamerica and he has worked extensively on Latin American diaspora, human rights, migration and transnationalism, comparative studies, ethnicity, indigenous worldviews and native knowledge, and indigenous literatures.

Several of his articles have been published in Ragazine and WorldView Magazines, Literary Yard, Literary Travelers and Quail BELL, while another appeared in “Crossing Class: The Invisible Wall” anthology published by Wising Up Press. His reviews have been published in the Midwest Book Review, by Revue Magazine, as well as Peace Corps Worldwide, and he has his own column in the “Arizona Authors Association” newsletter, “The Million Mile Walker Review: What We’re Reading and Why.” His essay, “Hugs not Walls: Returning the Children,” was a winner in the Arizona Authors Association literary competition 2020 and was reissued in “Revue Magazine.” Another article was recognized in the “Solas Literary Awards for Best Travel Writing.”

His honors include the “Service Above Self” award from Rotary International. He is a board member of “Advance Guatemala” and the membership chair for “Partnering for Peace.” His wife and three children were born in Guatemala. You can learn more at www.MillionMileWalker.com and www.Guatemalastory.net or follow him on Facebook at https://www.facebook.com/millionmilewalker/