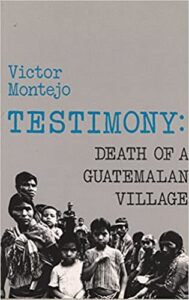 This would be the fourth of Montejo’s books I’d review in preparation for the production of a documentary on migration, “Guatemala: Trouble in the Highlands.” I’ve found this eyewitness account from a primary school teacher to be one of the most graphic descriptions of the violent conflicts between the Maya people and the army. Now that I’ve talked with him on several occasions, I appreciate why he is one of the most respected Maya intellectuals and activists in Guatemala today. And I can see why “Third World Resources” states, “One would be hard-pressed to cram more suspense and drama between the covers of a 120-page book than Victor Montejo has done in Testimony.”

The author’s “Dedication” reflects his motivation for writing it:

I dedicate this book

Of the many thousand

Who were killed or disappeared

Of aggression and struggle.

If there are attempts

To blot out their names

I know that wildflowers

From their clandestine bones-

Scattered there in the ravines and the mountains.

The author takes us to a remote village in the northwest of the Department of Huehuetenango, which borders with Mexico. “There are no movie houses nor theaters, television, electric lights, drinking water, or highways. The only access to this community is a narrow twisting road that crosses streams and deep gullies as they climb high into the craggy uplands.” Few of the villagers complete the sixth grade in school, as the majority abandon classes after third and fourth grades, “not because they do not like schoolwork, but because they must accompany their parents on their migration to the distant coast plantations.”

One of the real tragedies of this conflict is that the government forces chose local men to be the “civil patrols” that “protected” their communities against the insurgents. On September 9, 1982 the civil patrol of Tzalala mistook an army detachment dressed in olive fatigues for guerrillas and all hell broke loose. Army officers soon arrived in the village with their “blacklist” of suspects, which are, unfortunately, composed of members of the local civil patrol – neighbors ratting on neighbors. “How craven to betray a neighbor in that way – far worse than killing him with a weapon in hand,” according to the author. Any level of justice is impossible when “The army officers know they will rise in rank in accordance with the number of unfortunates they execute…”

The author was a local teacher and, unfortunately, was on the infamous “blacklist” and feared for his life. When an army helicopter arrived, but didn’t take him to the army base to be interrogated, the author was relieved because, “If they killed me, it was far better for my body to lie on my native soil, where I had been raised since childhood, than to be flung from on high into a river, a mountain slope or the crater of a volcano.”

Finally, the author was brought to the army base, where he heard an interrogation in process, “The wails of the unfortunate man got lost in the night’s sepulchral silence. The barking of dogs in nearby houses was the only response to the bone-chilling howls, which died down gradually, like a radio whose volume is lowered little by little until it is soundless. I shuddered to think of the fate of that luckless man after they finished with him. First, they cut out one eye, then the other. Then the nose, lips, the tongue, ears and testicles, and at last they sliced off his head. It is a slow, excruciating death, conceived to make a human being die in the greatest possible pain.”

During his interrogation, the author told the Lieutenant that the person who accused him was lying and went on to tell another chilling story, “…One year ago army soldiers shot down my brother in the park, in plain view of the entire town. The army then accused him of being a guerrilla, although the plain truth is that the soldiers had been drinking, and my brother was shot at random…”

Eventually, the local commander released the author, but ordered him to “check-in” to the base periodically. Then Efrain Rios Montt became President (an Evangelical stalwart who was born in Huehuetenango and took power in a coup d’etat in 1982) and “all remaining human rights were abolished and the army became the sole arbiter over the lives of Guatemalans”.  As the situation deteriorated, the author realized that he had to go somewhere else in order to protect this life. “…and so one dark night I fled with my wife and children in the firm expectation of returning when peace and tranquility will have returned to the beloved land of the quetzal (the Guatemalan national bird).

Respected anthropologist, Robert N. Carmack of SUNY said, “Victor Montejo’s testimony…is the single most powerful account I have read on the genocide that took place in Guatemala between the years of 1980-1982.” A truly compelling story of a human’s ability to endure brutalities from his fellow man while holding on to his family and culture.

The Author: The author received his Ph.D. in Anthropology in 1993 from the University of Connecticut. Victor Montejo was a Professor of Native American Studies at the University of California, Davis. His academic interest focuses on indigenous people of Mesoamerica and he has worked extensively on Latin American diaspora, human rights, migration and transnationalism, comparative studies, ethnicity, indigenous worldviews and native knowledge, and indigenous literatures.

Several of his articles have been published in Ragazine and WorldView Magazines, Literary Yard, Literary Travelers and Quail BELL, while another appeared in “Crossing Class: The Invisible Wall” anthology published by Wising Up Press.  His reviews have been published in the Midwest Book Review, by Revue Magazine, as well as Peace Corps Worldwide, and he has his own column in the “Arizona Authors Association” newsletter, “The Million Mile Walker Review: What We’re Reading and Why.” His essay, “Hugs not Walls: Returning the Children,” was a winner in the Arizona Authors Association literary competition 2020 and was reissued in “Revue Magazine.” Another article was recognized in the “Solas Literary Awards for Best Travel Writing.”