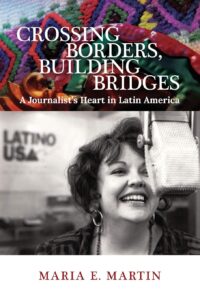 I first became aware of the author at a “Peace Corps Connect” conference in Austin, Texas in 2019 where she was on a panel on “Crossing Borders” with several experts on immigration including the Guatemalan filmmaker, Luis Argueta. Recently, I heard her program on immigration in Guatemala, which aired on the public radio program “Reveal.”  I contacted her once I learned that she was the head of the “Gracias Vida Media Center” in Antigua, Guatemala, which was when I learned about her new book, which was published by Conocimientos Press.

This book is an inspiring account of the author’s work for decades as a Latina radio journalist working across cultures, languages, and borders. She shares a series of fascinating stories and photographs to describe her life’s journey. The author was introduced to bilingual radio in northern California in the mid-70s and went on to volunteer for the “Somos Chicanas” program where she was given the opportunity to interview Cesar Chavez, the iconic leader of the farm worker movement.

Her arrival in Antigua, Guatemala in 2003 came after being forced off the public radio project she had created, NPR’s “Latino USA. She began working for KBBF radio, which would lead to an interview with a young Rigoberta Menchu, the Maya leader awarded the Nobel Peace Prize. The interview focused on the impact of the “model villages” where the Guatemalan government forced rural indigenous peoples to live, which negatively impacted the Indigena culture and resulted in the death of many.

Eventually documentaries would become her favorite format, given its in-depth format, and in 1987, she traveled to Nicaragua as a freelance journalist when civil wars were raging in Central America. During these dangerous times she appreciated that each “precious day also brings an almost agonizingly sweet love of life.” The poetry she heard seemed even more moving when news of battles and battered bodies were commonplace.

Music would be an important part of the revolutionary fervor in Nicaragua and one afternoon she would be part of an impromptu concert given by U.S. folk singer Peter Seeger. “After the meal, people found seats on benches, stones, stumps and wooden steps.” When Seeger would take out his guitar and sing, the author was close enough to translate his lyrics into Spanish.

After a productive career at NPR (National Public Radio), she would resign when many of her best program ideas about Latino culture and immigration issues were ignored. She went on to become the Senior Producer of “Latino USA,” where she reported on immigration from a policy, as well as a human interest story, perspective.

One of her freelance journalist assignments included an investigation of Sister Dianna Ortiz, who was abducted and tortured. This led to the investigative report, “The Betrayal of Sister Dianna Ortiz and Surviving Torture: The Search for Healing.” The Guatemalan government had been known for its abuse of human rights, but this story was complicated by the nun’s assertion that an American, “Alejandro”, was present in the torture chamber. The author’s ongoing research dismissed the official explanation that the nun was a victim of mistaken identity with a guerrilla leader, which wasn’t plausible since, according to the author, Sister Dianna lacked the Spanish fluency of a native speaker.

The broadcast date was scheduled for the tenth anniversary of Ortiz’s abduction and would be the author’s most ambitious documentary to date. She considered it a labor of love. In the end, the author would gain Sister Dianna’s trust and was grateful to Sister Dianna for having allowed her to share part of her story. The nun would go on to become an outspoken human rights activist and advocate for victims of torture, and the author would receive the Robert F. Kennedy Journalism Award.

Maria Martin would go on to train rural and provincial journalists throughout Latin America, but especially in Guatemala. She counteracted the tendency for big-city journalists to look down on local reporters when they came to the provinces. The author would eventually establish the “Gracias Vida Media Center” in Antigua.

Her commitment and vision for the future is reflected in her presentation at a University of Texas event commemorating four decades of work in public radio:

“Lives and careers come in cycles…Maybe now it’s your turn to give back to that mentor—that person who gave you support…” Her admonishment was to “pay it forward, pay it back.” Mandalit del Barco, Arts and Culture Correspondent for National Public Radio said it best, “The wonderful Maria Martin has been an inspiration for generations to follow her lead. There are so many of us working in public radio today who can testify how influential she’s been.”

Born in Mexico, and raised in the U.S., public radio pioneer Maria E. Martin lives and works in Antigua, Guatemala.

For more than a decade, Martin has directed the GraciasVida Center for Media based Guatemala and Texas—a media advocacy, production and training entity dedicated to the practice of independent journalism in the public interest in the Americas (www.graciasvida.org). Maria Emilia Martin has trained thousands of journalists in the U.S., Mexico and Guatemala.

His honors include the “Service Above Self” award from Rotary International. He’s a board member for “Partnering for Peace” and “Advance Guatemala.”   His wife and three children were born in Guatemala. You can learn more at www.MillionMileWalker.com and follow him on Facebook at https://www.facebook.com/millionmilewalker/