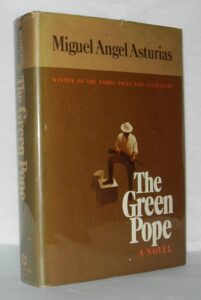 I initially read this book years ago in Spanish but decided to read and review it in English as its story is so relevant to the challenges facing Guatemala today. I’m also producing a documentary on immigration and social justice challenges in Guatemala, Trouble in the Highlands and this book deals with land tenure and the control of land by international/U.S. corporations. And the author is a Nobel Prize winner for literature.

Much of my documentary and Asturias’s works are inspired by the Maya culture in the highlands of Guatemala. This is an overarching theme which influenced the authors work and his writing style. His father was a judge who clashed with the dictatorship of Manuel Estrada Cabrera and he was forced to send his family to their grandparents in town of Salamá, which is close to where I met my wife in San Jeronimo, Baja Verapaz. This would be the author’s initial contact with Guatemala’s indigenous groups and his nanny was a young indigenous woman who told him stories of their myths and legends which influenced his works. His university thesis was, “The Social Problem of the Indian” and he studied ethnology at the University of Paris. His deep concern for the Mayan culture led to a 40-year project to translate the Mayan sacred text, the Popol Vuh, in Spanish.

Following the Second World War, the United States increased its presence in Latin America and companies like the United Fruit Company manipulated politicians and exploited land and Guatemalan workers. This inspired “the Banana Trilogy” which this book is part and revolved around the exploitation of indigenous people.

The Green Pope is George Maker Thompson, the U.S. founder of banana plantations. He abandoned piracy in the Caribbean to venture into the steamy interior. He was described by Asturias as follows,

“…’the blond high priest of progress,’ as Doña Flora called her daughter’s fiancé, George Maker Thompson, an apparition who came proposing to them to sell their land for hard cash-he showed the gold coins to them with a gleam in his eyes-and at the price they asked.”

The Green Pope falls in love with a young girl, Mayaris, who stirs up the Indigenous community against him and who finally plunges into a river, in bridal white, as a sacrificial suicide. Her mother, Doña Flora, owner of vast holdings her-self, marries Thompson and then dies bearing his daughter.

A Guatemalan military commander explains the process of taking land from local farmers as follows,

Lead bullet or gold bullet, without scruples; an iron hand without qualms; and the one indicated for that, in my opinion, is George Maker Thompson, who believes in force, who expressed it very well the other day in the dining room. His words are still in my head: men are eighter ruled by force or they should be left alone. They’re governed in order to make them develop, the way children are punished for their own good, for their future development.

The consequence of this force plays out along the waters of the Montagua River where the flood of the dead began,

Where had they drowned? How had they drowned? Women garlanded with tears ran to the banks to recognize the bodies of their husbands, fathers, sons, brothers. Others, with less luck received the corpses of theirs half eaten by jaguars, the devoured remains of bones and rotten or dry flesh. And others, alas, had to avert their eyes from that terrible and hypnotic firefly that shines in the uselessly opened eyes of those who have been the victims of snakes.

The strategy to coopt local officials to build the major railroad and largest business enterprise in the country looked like this:

We will have to buy chiefs of state, deputies, magistrates, mayors…Every-one with power, influence. And command must praise our agricultural, commercial, economic, and social enterprise with beating drums…And a lot of money for the newspapers, editors, reporters, gifts to poor houses, old folks’ homes, orphanages, churches…

Or as the author summed up, “A different god was arriving: the Dollar, and a different religion, that of the Big Stick.”

Throughout Asturias’ literary career he was involved with politics and opposed the Cabrera Dictatorship and supported the government of Jacobo Arbenz who eventually was overthrown in 1954 by a CIA led coup. Asturias was expelled by the government, and he fled to Buenos Aires. His son from his first marriage became known aa Gaspar llom, the name of an indigenous leader in his own father’s novel, Men of Maize, and was the President of one of the guerrilla groups during the Guatemalan Civil War.

“No one has a more irrepressible imagination, or greater imagination or a deeper sense of human tragedy.” Frank Tannenbaum, Institute of Latin American Studies, Columbia University. And L’Express said, “…the greatest novelist of revolution.”

Born in Guatemala, the author studied the myth and religion of Central America in Paris, where he was a correspondent for several Central American Newspapers. He pursued a diplomatic career, and represented the Guatemalan government in France, Argentina, El Salvador, and Mexico. He was awarded the Nobel Prize for Literature in 1967. Other works include El Papa Verde and Hombres de Maiz. This book received an Ibero-American Novel Award from The William Faulkner Foundation.