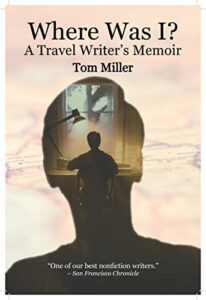 I’ve gotten to know the author over the years based on a shared appreciation of iconic writer Moritz Thomsen, who Tom met in Ecuador and our love of travel and travel writing. The Panama Hat Trail is one of my all-time favorite tales, and I was impressed when I learned it took the author two trips and eight months to complete it! My wife, who is Guatemalan, loved How I Learned English, a series of stories of Latinos learning English.

Since the author is considered by many as one of the best nonfiction/travel writers, I headed for the chapter on that subject. Initially, the author didn’t know that travel writing was a genre, but quickly learned, “Great travel writing describes what’s going on when nobody’s looking. It consists of equal parts curiosity, vulnerability, and vocabulary. It is not simply for know-it-alls or the indecisive. “A well-grounded sense of place is a challenge for the writer.” That says it all.

But wait! He goes on with, “Surely as buses plunge off Peruvian mountainsides, his favorite travel accounts are full of, “polemic, prejudice, and adversity; revelation, conquest, and triumph.” And that the best travel writing “elegantly addresses history, geography, and politics; biology, culture, even criminology. Its refreshing honesty reveals a world of surprising love and disappointing fools, unforeseen circumstances, and stimulating challenges, ” All of this is a reminder of why I love travel writing and everything Miller writes.

Next, I found the segment about his relationship with fellow writer Moritz Thomsen, who he met in Quito at 9,300 feet. He saw the “chain-smoking Thomsen with some frequency and formed a deep friendship that continued during an extensive correspondence. He admired Thomsen for “… the words he chose, the order he put them in, his grand illusions and sideways allusions.”

After providing background on Thomsen’s life and how he joined the Peace Corps at 48 and published four (eventually five) books by the end of his life, Miller briefly described what made them so special, “They revealed elegantly phrased but brutal truths about life among the poor. Drawing on Proust, Stravinsky, and Hemingway, Thomsen got inside the skin of his rawboned neighbors and found them burdened with a combination of passion and ignorance.”

His best-known book was Living Poor, the Peace Corps experience book. According to Miller, Thomsen proved to be a man of insufferable integrity and undeniable charm. He deflected efforts to translate his works into Spanish, which I thought should have been “…because, as he once confided, he did not want those he lived among to see that he wrote about them.”

Miller was a keynote speaker at the First International Conference on Moritz Thomsen in Quito. Ecuadoran writers reappraised Moritz Thomsen—dealing with salient questions such as Was Thomsen an ex-pat or a true Ecuadoran. Should his work be considered travel literature? According to Miller, one Ecuadoran sniffed, “Too much politics and social awareness, but minimal artistic sensibility.” Through all of this, Miller was named the HUESPED ILUTRE (Illustrious Guest) for writing about Ecuador and keeping the words of Moritz Thomsen alive.”

Miller and I were contemporaries, both Conscientious Objectors protesting the war in Vietnam, although he wrote for some of the top underground publications.  He said his last salaried job was in 1969 so he could pursue a fifty-year career as a freelance writer. He interacted and dealt with Jerry Rubin, who he eventually deemed a “public nuisance.”

He tells a fascinating story of his search for the real Don Quixote. In Spain, he tracked down a “Puticlub” (whorehouse) to determine if any of the ladies knew or talked about Don Quixote’s leading lady, Dulcinea.

He describes some of his 30 visits to Havana, where he met his wife, Regla, and his interaction with Ry Cooper. The latter introduced him to the world outside of Cuba through the magical music group “Buena Vista Social Club.”

Miller spent much time on the border between the U.S. and Mexico, living most of his life in Tucson, Arizona. He provides considerable insight on immigration, “I am the beneficiary of Baltic immigration from two generations ago (Lithuania) and a benefactor contemporary Caribbean migration, and I can assure you of this: the numerous foreigners who cross our borders invigorate our workforce, stake out our own neighborhoods, and enrich our country with their language and culture. If that’s patriotism, give me more.”

Miller begins and ends his memoir with his battle with Parkinson’s at 62, making for some very poignant stories. As he puts it, “…I’m here to say that having led a fairly healthy life into my early sixties, to suddenly learn that the rest of my time would be spent with a disease from which I could never get better, only retard it from getting worse, well, that put me in a funk. Funquíimo.”

And ends his book with, “Parkinson’s is fashionable these days,” writes Michael Kinsley in Old Age: A Beginner’s Guide. Perhaps so, but it was never on my dance card, lord knows. Still, on entering my ultimo tercio de la vide, the final third of my life, I’ve broken through denial and reluctantly adapted to the unknown. Now, where was I?”

I agree with fellow author Adam Hochschild, King Leopold’s Ghost about Miller, “A superb display of sharp observations from a man who’s been everywhere you’d ever want to go, known everyone you’d ever want to meet, and brought it all alive in a voice you wish you had.”

One last note, the author was obliged to self-publish his memoir, despite having written seven books, edited four, and is considered one of our best nonfiction writers—a clear indicator of changes in the publishing industry and the reputation for travel writing.

Miller was born and raised in Washington, D.C., attended college in Ohio, and since 1969 has lived in Arizona, 65 miles north of the Mexican border. He has been writing about Latin America and the American Southwest for more than thirty years, bringing us extraordinary stories of ordinary people. His highly acclaimed adventure books include “The Panama Hat Trail” about South America, “On the Border,” an account of his travels along the U.S.-Mexico frontier, “Trading With the Enemy,” which takes readers on his journeys through Cuba, and, about the American Southwest, “Revenge of the Saguaro” (formerly “Jack Ruby’s Kitchen Sink” — which won the coveted Lowell Thomas Award for Best Travel Book of the Year in 2001). He has edited three compilations, “Travelers’ Tales Cuba,” “Writing on the Edge: A Borderlands Reader,” and “How I Learned English.” Additionally, he contributed to the four-volume “Encyclopedia Latina.”

Miller, a veteran of the underground press of the late 1960s, has appeared in Smithsonian, The New Yorker, LIFE, The New York Times, Natural History, and many other publications. He wrote the introduction to “Best Travel Writing – 2005” and has led educational tours through Cuba for the National Geographic Society and other organizations.

Well-traveled through the Americas, Miller has taught writing workshops in four countries, and his books have been published in Europe, Latin America, and the United States. In recognition of his work, the University of Arizona Library has acquired Miller’s archives and mounted a major exhibit of the author’s papers, including Moritz Thomsen materials. He is affiliated with that school’s Latin American Area Center.

His book, Different Latitudes: My Life in the Peace Corps and Beyond, was recognized by the Arizona Literary Association. According to the Midwest Review, it “…is more than just another travel memoir. It is an engaged and engaging story of one man’s physical and spiritual journey of self-discovery.”

His articles have been published in Ragazine and WorldView Magazines, Literary Yard, Scarlet Leaf Review, and Quail BELL. At the same time, the Solas Literary Award recognized two essays, including a Bronze award, in this year’s “Best Travel Writing” Travel Adventure category. Two of his essays were winners at the Arizona Authors Association Literary Competition, and another was recently published in ELAND Press’s newsletter.  He’s a contributing writer for “Revue Magazine” and the “Literary Traveler.” His column, “The Million Mile Walker Review: What We’re Reading and Why,” is part of the Arizona Authors Association newsletter. His latest book, My Saddest Pleasures: 50 Years on the Road, will be available in June.  He’s working on his next book, Moritz Thomsen, The Best American Writer No One’s Heard Of. He continues to produce a documentary on indigenous rights and out-migration from Guatemala, “Trouble in the Highlands.”  His wife and three children were born in Guatemala. You can learn more at www.MillionMileWalker.com.