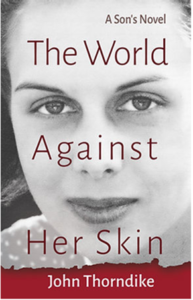 I connected with the author through a shared appreciation of the author of Living Poor, Moritz Thomsen. He also reviewed Thomsen’s book Bad News from a Black Coast, and it was so good I asked to include it in a novel I’m working on about the influence of Moritz Thomsen on other writers, and he agreed.

I learned that he traveled to Cuba with fellow author and friend, Tom Miller, which resulted in his best-known book, One Hundred Fires in Cuba. I soon became aware that the author was also a Returned Peace Corps Volunteer who also married a lady from his host country, El Salvador, and went to Chile. My wife is Guatemalan, and we lived there for many years.

Thorndike is a talented writer, so I was pleased to receive his new book with the following note:

Mark–
Here it comes, at last, the novel I always wanted to write. It was actually a memoir that turned into a novel, as I invented some scenes and filled in the details. Really, it’s a full mix of fact and fiction. As the Spanish novelist, Javier Cercas says, “My aspiration was to lie anecdotally, in the particulars, in order to tell an essential truth.” The story is a bit scandalous in places, but I don’t shy away from that. The full scoop is below.
Tom Miller’s book sits on my bedside table, and I’ll get to it soon, along with yours. But today, on Mother’s Day and the publication day of The World Against Her Skin, I’m a bit overwhelmed! This is the book I’ve always wanted to write about my mother.

The author always starts his books with an epitaph of the author, James Salter, which in this case sets up what the reader is about to embark on:

There are really two kinds of life. There is, as Viri says, the one people believe you are living, and there is the other. It is the other which causes the trouble, this other we long to see.

Initially, I found the book challenging, as the author writes about things I don’t even think about—touchy things like his mother’s addictions and sexuality but in an understated and elegant way. The author explains this phenomenon in a brief “Author’s Note” at the beginning of the book:

There can’t be many men in America who have heard this kind of intimate report about their mother. But I am that strange guy who would like to see the complete video of my parents’ lives, every delicate or searing moment…I figure that as I grew up, all those secrets were playing out in my family every day. Now, starting with what I know, I have imagined the rest and written this book, which is as close as I can get to my mother’s life.

Writing this book was the author’s way of keeping his mother’s memory close to him. Virginia and Joe Thorndike have been married for twenty-two years, and now she’s in love with a surgeon thirteen years her junior. Although the author never saw his mother and father fight, she leaves her husband and flies to Miami to start living with Rich Villamano, but there he tells her he has changed his mind and they must go their separate ways. In a flash, their four-year affair is over. She takes off in his car, heading north with no luggage, no hope or destination. She buys a bottle of gin and drinks it straight. She abandons the car, flies to New York, and takes an airport hotel room. She has no home and nowhere to go.

​In this biographical novel, much is remembered and much imagined. Emotional flashbacks from Virginia’s youth expose the sexual abuse by her father, an affair with her high school diving coach, and her marriage to a jealous first husband.  Then, after her divorce from Joe Thorndike, she fights to hold onto her sons. She even studied and became an anesthesiologist, which allowed access to the medications and drugs she’d abused, and which led to an untimely death at 57. When sober, she can rise to the occasion. Other times not.

The author describes the deterioration of their tightly knit family in one scene where their estranged father calls and the sons, “They admit their mother is drinking, but claim it’s not that much, keeping from their father a knowledge that will only hurt him. Six months ago, they were kids in a family. Now they’re young men doing what they can to protect their parents.”

According to the author, her two sons are not her real sons, but the sons in this story pursue as unconventional a lifestyle as their mother. Neither of her sons care much for monogamy. “Jamie and Miles pay it little heed (Jamie is gay), and Rob, “with his six marriage, is clearly on a campaign against it.” (Rob lives in a commune).

Eventually, his mother Ginny’s stressed life is straightened out when she joins the Peace Corps and is sent to the gorgeous region of Temuco, which is the entrance of the Lake Region in Southern Chile. Part of her therapy is learning to appreciate the traditional drinking of mate the author describes beautifully:

She puts her kettle on to boil, scoops some mate into a cup and explains the basics of the ritual. One person drinks at a time, but the cup is communal. The bombilla is also shared but wiped clean each time the cup passes. “Old-timers” use a gourd, and you add some sugar if you like. I always take it without. I like it bitter.

Despite these nostalgic images of Ginny’s Peace Corps experience, the novel ends with a poignant scene in which Ginny finally succumbs to the pills she’s depended on over the years, “But now she’s alone and her house is cold. She reaches for the glass of water by her bed and takes a sip. She can still move her arm. She can still raise her head, but not for long. Her body is fading and all thought as well. She needs to sleep and not wake up.”

The author also sent me several videos I recommend before reading the book:

–What My Mother Told Me  https://www.youtube.com/watch?v=A8AVj-eY7B4

John Thorndike grew up in New England, graduated from Harvard, took an MA from Columbia, then lit out for Latin America. He spent two years in the Peace Corps in El Salvador and two, with his wife and child, on a backcountry farm in Chile. Eventually he settled with his son in Athens, Ohio, where for ten years his day job was farming. Then it was construction. His first two books were novels, followed by a memoir, Another Way Home, about his wife’s schizophrenia and his life as a single parent. A second memoir, The Last of His Mind, describes his father’s year-long descent into Alzheimer’s, and was a Washington Post Best Book of 2009. His third novel, A Hundred Fires in Cuba, follows the love affair of a young American photographer and Camilo Cienfuegos, one of the heroes of the Cuban Revolution. The author’s website is johnthorndike.com

He’s a contributing writer for “Revue Magazine” and the “Literary Traveler.” His column, “The Million Mile Walker Review: What We’re Reading and Why,” is part of the Arizona Authors Association newsletter. His first book is Different Latitudes: My Life of the Peace Corps and Beyond.  His latest book, My Saddest Pleasures: 50 Years on the Road, is now available on Cyberwit.net.  He’s working on his next book, Moritz Thomsen, The Best American Writer No One’s Heard Of. He continues to produce a documentary on indigenous rights and out-migration from Guatemala, “Trouble in the Highlands.”  His wife and three children were born in Guatemala. You can learn more at www.MillionMileWalker.com.