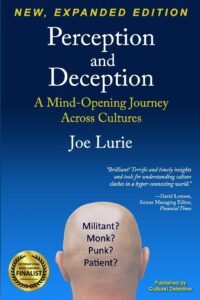 The eye sees only what the mind is prepared to comprehend. — Henri Bergson

I learned of Joe’s work and book from an interview on the Global TV Talk Show—whose host, Ed Cohen, asked many revealing questions. I learned that Joe and I are contemporaries—he was in Kenya with the Peace Corps when I was in Guatemala, but he took his knowledge of cross-cultural communications to new levels, and we have a more tolerant world as a result—at least among those who have read his book or participated in one of his classes/courses.

I contacted Joe through the host of Global TV Talk Show, and he sent me a copy of his book. Although the book was first published in 2015, it’s timelier than ever, given the growing cultural divide, misinformation about immigrants, and the heightened rhetoric of mistrust and hatred. This situation motivated a new chapter in the second edition, “Globalization and its Disconnects: Convergence Without Context,” which focuses on cross-cultural misperceptions in religion, migration, and technology and provides practical strategies to cope with these disrupting cultural disconnections.

Often what sounds or looks rude or crude to us has an entirely different meaning in a different culture, and Lurie provides a practical guide to help deal with other cultures. Despite the declining number of refugees and immigrants allowed to enter the country, we still are, and always will be, a country of immigrants.

Throughout the book, the author uses graphics and images effectively to enhance an appreciation of the dynamics of cross-cultural communications. The stories from over 70 countries (indexed by culture) are illuminated by the author’s rich collection of international proverbs and sayings that reflect the nature of perception, perspective, and “truth.”

The cover of the first edition of his book was of a cow, and the questions: Devine? Dowery? Dinner? He came up with an even more compelling image on his second edition of a bald head of a white man with the words: Militant? Monk? Punk? Patient?” Lurie also ends each chapter with a series of practical activities.

Many of the author’s most distressing stories had humorous moments, like the Sikh UPS driver who was tired of being mistaken for the “Taliban” because the Sikhs wore a turban. Here in Arizona, this mistaken identity led to the death of a gas station attendant. In this case, the UPS driver printed up shirts with a response, “I am a Sikh. Google it.”

One of the author’s antidotes, “To sit or not to sit?” explains that a billion people all over the world relieve themselves by crouching and straddling a hole in the floor. At the same time, those who sit on toilet seats regard the footprints as disrespectful and unhygienic. This reminded me of when I was helping organize an appropriate technology workshop at an agricultural school in Guatemala as a Peace Corps Volunteer, which farmers and farming professionals attended.  We emphasized the importance of putting the lids of the porta-pottys down to avoid swarms of flies—and were surprised at the end of the day to find that the lids on all the pottys were down and covered by feces. At that point, we realized that the participants had taken our message of closing the lids very seriously…

Lurie’s report on the abysmal global literacy of most Americans makes his work even more timely. Only 34% of U.S. university students realize that more Mexicans have left the United States than entered in the last five years, and only 57% were able to identify Sudan as being in Africa. And in a National Geographic survey, 70% of U.S. students in the survey were found to be globally incompetent,” lacking the capacity and disposition to understand and act on issues of global significance,” which exacerbates the growing misinformation and hate messages about refugees and immigrants spread by many of our political leaders today.  And finally, although only ¼ of the world’s population speaks English, the U.S. does not require K-12 students to learn a second language.

For more information about book presentations and intercultural training offerings for educators, businesses and NGOs, message the author Joe Lurie through LinkedIn: https://www.linkedin.com/in/joe-lurie-616b8b14/.

Joe Lurie is Executive Director Emeritus of the University of California Berkeley’s International House, a dynamic multi-national residential program center serving the campus, local community, and 1,000 residents from 75 countries annually.  Its mission is to foster intercultural respect and understanding to promote a more peaceful world.

He served in this role for two decades and subsequently has been an active teacher, intercultural trainer, and consultant on cross-cultural communications. Clients in the U.S. and around the world have included: Google, Google.org; UC Berkeley; Chevron; American Express; The Peace Corps; The Institute of International Education; Upwardly Global; Street Smart Brazil;  The World Affairs Council of Northern California; The Commonwealth Club of California; The University of Colorado; Cal Discoveries Travel; and Tsinghua University in Beijing, among others.

A former Peace Corps volunteer in Kenya, Joe directed programs in France, Kenya, and Ghana for the School for International Training and served as Vice-President for AFS Intercultural Programs in the U.S. and National Study Abroad Chair for NAFSA: Association of International Educators.

​He was featured in a PBS documentary broadcast across the U.S. and in China and has been featured on C-Span’s Book TV.  Joe holds an advanced degree and diploma in African Studies from the University of Wisconsin, Madison, and an M.A. in English from McGill University in Montreal.

He is a contributing writer at Literary Traveler, Wanderlust, and Revue Magazine. Different Latitudes: My Life in the Peace Corps and Beyond was his memoir, soon followed by, My Saddest Pleasures: 50 Years on the Road. Two of his 25 articles were recognized by the Solas Literary Awards for Best Travel Writing, with a Bronze for “Travel Adventure.”  His wife and three children were born in Guatemala. Over 60 book reviews and 25 articles can be found on his website, www.MillionMileWalker.