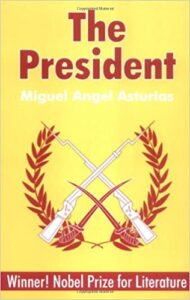 I’d read this Latin American classic in Spanish years ago, but decided to read it again in English in order to share it with a broader audience. Although it was published before I was born, it’s relevant today, as it portrays the damaging psychological impact of a totalitarian government and the brutality it will go through to maintain power—a phenomenon all too real to Guatemalans today.

Much to my surprise, my Guatemalan wife had to read this when she was in seventh grade – something I wouldn’t recommend for today’s students in the U.S. even though it’s been translated into English. I was shocked when my wife informed me that she also had to memorize the first paragraph, which is a clear indicator that you’re in for an interesting literary journey:

The passage also reminds me why I’m glad I didn’t have to translate this book! The style of El Señor Presidente influenced a generation of Latin American authors. His use of dream imagery, onomatopoeia, simile and repetition of phrases, combined with a discontinuous structure, make for an interesting, but challenging, read. The author was awarded the Nobel Prize in Literature in 1967 for his entire body of work and in recognition of the region’s literature as a whole—another reason the book is so important.

The dictator depicted in the novel is Guatemalan President, Manuel Estrada Cabrera (1898-1920). The author started writing the novel in the 1920s when he was a young law student, but it wasn’t finished until 13 years later in Mexico due to strict censorship policies of the Guatemalan dictatorial government.

The author draws from experience as a journalist writing under repressive conditions to convey the government’s transgressions reflected in this passage about the plight of one political prisoner who is sent to the dungeons below:

A few steps further on they entombed him in an underground dungeon three yards long by two and a half yards wide, in which twelve prisoners condemned to death were already standing packed together like sardines, motionless for lack of space, satisfying their physical needs where they stood and trampling on their own excrement….

The pleas of one prisoner reflects the inhumane conditions prisoners suffered from:

…His cries grew fainter and fainter as they echoed through the vaults. He beat on the walls, stamped on the floor with his feet and shouted again and again, until soon his shouts had become yells…” Water, soup, salt, fat, anything; water, soup…

The author’s work reflects the origins of the use of violence and torture still common in Guatemala today.

Asturias was one of the early authors to use magic realism, a literary technique often employed by such acclaimed Latin American writers as Gabriel Garcia Márquez. The author’s surrealistic dream sequences to demonstrate the police state’s impact on the individual psyche is reflected in this passage:

And each time anyone described what had happened, General Canales came out of his grave and died all over again; he sat down to eat by lamplight at a table without a cloth, they heard the rattle of cutlery and plates, the footsteps of the orderly, a glass of water being poured out and a newspaper unfolded, and then—nothing more, not even a groan. They found him lying across the table dead, his cheek resting on El Nacional, his eyes half-closed, glassy, staring at something that was not there.

The author moved to Paris in 1923 where he studied anthropology at the Sorbonne and continued writing his book while he associated with members of the Surrealist movement and future Latin American writers like Cuban Alejo Carpentier.

Asturias expressed what motivates his writing in his acceptance speech of the Nobel Prize for Literature, “My work will continue to reflect the voice of the people, gathering their myths and popular beliefs and, at the same time, seeming to give birth to a universal consciousness of Latin American problems.”

The Times Literary Supplement sums up the impact of this book with, “Asturias leaves no doubt about what it is like to be tortured, or what it is like to work for a man who is both omnipotent and depraved.” Dorian Jackson of Roger Williams University goes on to say, “A much-needed English language edition of one of Latin America’s greatest novels. The translation captures the truest essence of the original work. This is a must-read for those wanting to understand our current political culture.”

Born in Guatemala, the author studied the myth and religion of Central America in Paris, where he was a correspondent for several Central American Newspapers. He pursued a diplomatic career, and represented the Guatemalan government in France, Argentina, El Salvador, and Mexico. He was awarded the Nobel Prize for Literature in 1967. Other works include El Papa Verde and Hombres de Maiz. This book received an Ibero-American Novel Award from The William Faulkner Foundation.

Several of his articles have been published in Ragazine and WorldView Magazines, Literary Yard, Literary Travelers and Quail BELL, while another was recognized by the “Solas Literary Award for Best Travel Writing.”  He’s a contributing writer for “Revue Magazine” and the “Literary Traveler.” His book reviews have been published by Revue Magazine, as well as Peace Corps Worldwide, and he has his own column in the Arizona Authors Association newsletter, “The Million Mile Walker Review: What We’re Reading and Why.”