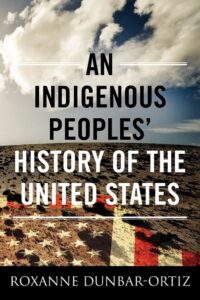 I purchased this book for a trek through the Hopi and Navajo Nations in order to better appreciate a different culture, worldview food and lots more. They are two of five hundred federally recognized Indigenous nations comprising three million people, descendants of the fifteen million Native people which once inhabited this country—the Navajo Nation is the largest.

I chose this book to get a perspective from a Native American and how they resisted “Manifest Destiny” and a U.S. “settler-colonial” regimen, which is rarely presented in our history books. Spanning four hundred years, the bottom-up peoples’ history reframes U.S. history and, according to the former president of the Navajo Nation, Peterson Zah, “The American Indians’ perspective has been absent from colonial histories for too long, leaving continued misunderstandings of our struggles for sovereignty and human rights.”

“Nation, race, and class converged in the land,” according the historian David Chang. Everything in U.S. history is about land—who controlled and cultivated it, fished its waters and maintained the wildlife and according to the author, “…who invaded and stole it; how it became a commodity (“real estate”), broken into pieces to be bought and sold on the market.”

European peasants were actually the first populations forcibly organized under the profit motive. When Columbus arrived in the Americas in 1492, he didn’t “discover” anything, as the lands were already occupied and systems to rule established. Military historian John Grenier describes the colonialist warfare against the Indigenous peoples as follows,

For the first 200 years of our military heritage, then, Americans depended on acts of war that contemporary professional soldiers supposedly abhorred: razing and destroying enemy villages and fields; killing enemy women and children; raiding settlements for captive ; intimidating and brutalizing enemy noncombatants. From 1607 and 1814, Americans forged two elements—unlimited war and irregular war—into their first way of war.

Disease played a major role in the displacement of Native peoples. In the case of the Pontiac rebellion in 1763, Major General Jeffery Amherst, who commanded the British Army, promoted sending smallpox “among those disaffected Tribes of Indians to ‘reduce them.’” Evidently, the desire of plantation owners to expand their holdings and number of slaves was another motivating factor to clearing their lands of Indigenous peoples in the South. Andrew Jackson was the implementer – the final solution for the Indigenous peoples east of the Mississippi. He was an influential Tennessee land speculator, politician, and wealthy slave owner and according to the author, a veteran “Indian killer.”

Passing through Taos, I often visited Kit Carson’s house, as he was one of the legendary Wild West figures, but he’s seen differently among Native Americans because he played a major role in the success of the U.S. invasion of northern Mexico and he continued to work as a “colonial mercenary.” Born in 1809 in Kentucky, Carson was a fur trapper and entrepreneur, as well as a noted Indian hater and killer. Carson was recruited by U.S .Army colonel, James Carleton, who formed the Volunteer Army of the Pacific in 1861. They led a series of search-and-destroy missions against the Navajos, with the campaign culminating in March 1864 in a three-hundred-mile forced march of eight thousand Navajo civilians to a military concentration camp at the army base of Fort Sumner, an ordeal known as the “Long Walk.” A fourth of the incarcerated died of starvation, and not until four years later were they allowed to return to their homeland in the Four Corners area.

The author tells of the 371 treaties between Indigenous  nations and the United States until Congress halted formal treaty making in 1871.This meant that Congress and the president could make laws affecting an Indigenous nation with or without negotiations or consent. During the period of treaty making, the author contends that approximately two million square miles of land passed from Indigenous nations to the United States.  And we all know the sad history of the disappearance of buffalo on the plains, which is also included.

In 1875, Captain Richard Henry Pratt established the Carlisle Indian Industrial School in Pennsylvania, which became the prototype of many militaristic federal boarding schools set up across the continent, which were augmented by dozens of Christian missionary boarding schools. The stated goal was the assimilation of Indigenous children, who were prohibited from speaking their mother tongues or practicing their religion while being indoctrinated in Christianity, a process Pratt referred to as, “Kill the Indian and save the man.”

The author makes an interesting comparison between the massacre at Wounded Knee in 1890 and the killing of innocent Vietnamese people at My Lai in 1968. The irony of this sad comparison was raised by the National Congress of American Indians, which pointed out that fifteen thousand Native Americans were serving as combat troops in the Persian Gulf when our military personnel were using the term “Indian Country” to designate enemy territory in Vietnam.

The book ends with some serious questions about the impact of U.S. militarization in the U.S., as well as around the world. Historian Peter Kuznick and filmmaker Oliver Stone ask, “Why does our country have military bases in every region of the globe, totaling more than a thousand by some counts? Why does the United States spend as much money on its military as the rest of the world combined? Why does it still possess thousands of nuclear weapons, many on hair-trigger alert, even though no nation poses an imminent threat?” The author goes on to say that Stone and Kuznick fail to mention that the U.S. at the time was invading, subjecting, colonizing, and removing the Indigenous farmers from their land, as it has since its founding, and as it would through the nineteenth century…”

Simon Ortiz, Regents Professor of English and American Indian Studies at Arizona State University provides an astute critique of the importance of this publication,

Roxanne Dunbar-Ortiz’s Indigenous Peoples’ History of the United States is a fiercely honest, unwavering, and unprecedented statement, one which has never been attempted by any other historian or intellectual. The presentation of facts and arguments is clear and direct, unadorned by needless and pointless rhetoric, and there is an organic feel of intellectual solidity that provides weight and trust. It is truly an Indigenous peoples’ voice that gives Dunbar-Ortiz’s book direction, purpose, and trustworthy intention. Without doubt, this crucially important book is required reading for everyone in the Americas!

Roxanne Dunbar-Ortiz grew up in rural Oklahoma. She has been active in the international Indigenous movement for more than four decades, and is known for her lifelong commitment to national and international social justice issues. After receiving her PhD. in history at the University of California at Los Angeles, she taught in the newly established Native American Studies Program at California State University, Hayward, and helped found the Departments of Ethnic Studies and Women’s Studies. Her 1977 book, The Great Sioux Nation, was the fundamental document at the first international conference on Indigenous peoples of the Americas, held at the United Nations’ headquarters in Geneva. Dunbar-Ortiz is the author or editor of several books, including An Indigenous Peoples’ History of the United States. She lives in San Francisco.