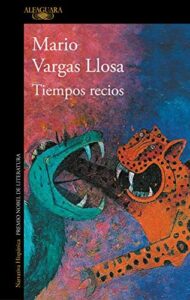 I immediately picked up this book upon learning it was available in English, as its story is so relevant to the challenges facing Guatemala today. I’m producing a documentary on immigration and social justice challenges in Guatemala, Trouble in the Highlands, and this book deals with international intrigue and the control of land by international/U.S. corporations.

A Peruvian writer, Llosa is one of Latin America’s most significant novelists and some critics consider him to have had a larger international impact and worldwide audience than any other writer in Latin America. He was awarded the Nobel Prize for literature in 2010.

I recently heard an interview on NPR in which Llosa reflects on his response and that of many of Latin America’s writers about the CIA toppling the democratic government of Jacobo Arbenz in 1954, and the assassination of his successor, Carlos Castillo Armas.  It made Guatemala a “frantic country” gripped by a ruinous and wholly unnecessary antipathy towards something that never threatened, as it is soon “racing backwards towards tribalism and absurdity.”

Vargas Llosa adheres to historical facts, but vividly creates the inner lives of his historical and invented characters (often difficult to differentiate), allowing the novel to speculate and illuminate both detail and motive. This is where fiction informs and expands one’s appreciation of reality.

Harsh Times is a story of international conspiracies and conflicting interests in the time of the Cold War. The author invents vivid characters who go to the heart of dilemmas of Guatemala’s history. He brings to bear his impressive research from The Feast of the Goat about the downfall of the Trujillo regime in the Dominican Republic to bear on this story, since some of the characters went back and forth between these two international conspiracies.

The author uses some humor when describing the links between the staggering profits selling Guatemalan bananas and the financial links to the Republican U.S. secretary of state, John Dulles, and his brother, Allen, director the CIA. They “hadn’t invented the banana, of course” he quips, but they “never paid a cent in taxes” and treated their workers little more than slaves.

The press played an important role, along with the U.S. government in protecting United Fruit, as articulated by the head of United Fruit:

“We are the ones who have to enlighten the government and public opinion about Guatemala, and to do it in such a way as to convince them the problem is so serious, so grave, that it must be taken care of immediately. How? With subtlety and good times. Organizing things to that public opinion, which is essential in a democracy, pressures the government to act in order to head off a serious threat. What threat? The very same one I have just told you Guatemala doesn’t represent: the Soviet Trojan horse sneaking through to U.S.A.’s back door…”

The dialogue between the Guatemalan President and the U.S. Ambassador reveals the power dynamics which existed between the two countries, starting with the Ambassador, “Forty communist members of your government,” the Ambassador said with extremely undiplomatic curtness. “I am asking you in the name of the United States to remove them from their posts immediately as infiltrators in the service of a foreign power working against the interests of Guatemala.

The Guatemalan President glanced at the list, which included some good friends, close collaborators and a few self-declared leftists, many no more communist than he was. To which the President says, “We’re starting off on the wrong foot, Ambassador. You’ve been badly informed…” And ends with, “Have you forgotten that Guatemala is a sovereign nation and that you are an ambassador, not a viceroy or proconsul?”

Following the fall of President Arbenz, there were five military juntas, each of them closer to the United States than the last, all “buckling” under the U.S. Ambassador’s demands, each trying to outdo its predecessor in its willingness to “persecute, capture, torture, and execute communists. He goes on to reveal that following Castillo Armas’s rise to power, “approximately 200,000 Mayans, terrified by the slaughter, managed to flee to Chiapas in Mexico… Not since the era of the Inquisition had political repression in Guatemala taken the form of burnings of pernicious and subversive documents, which occurred now on the military bases and in the public squares.”

The book ends with a good “summing up,” “…the United States erred terribly in preparing a coup against Arbenz with Colonel Castillo Armas at the head of the conspiracy. The victory was fleeting, pointless and counterproductive. It helped foment anti-Americanism in Latin America all over again, invigorated the Marxists, the Trotskyites, and the Fidelists. It radicalized Fidel Castro’s 26th of July Movement and pushed it toward communism…”

Vargas Llosa is one of the literary giants of the Americas or, as Raymond Sokolov of The Wall Street Journal put it, “In the star-studded world of the Latin American novel, Mario Vargas Llosa is a supernova.”

Vargas Llosa has won the Miguel de Cervantes Prize, the Spanish-speaking world’s most distinguished literary honor. His many works include The Feast of the Goat, In Praise of the Stepmother, and Aunt Julia and the Scriptwriter. Like many Latin American writers, the author has been politically active throughout his career. While he initially supported the Cuban revolutionary government, he later became disenchanted with its politics, particularly after the imprisonment of Cuban poet Heberto Padilla in 1971. He ran for the Peruvian presidency in 1990.