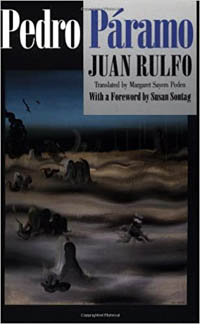 I first learned of what is considered “one of the masterpieces of twentieth-century world literature” while reading Paul Theroux’s, “On the Plain of Snakes.” In his critique of Mexican literature, he mentions “Pedro Páramo” because, unlike many Mexico’s best-known authors, Rulfo wrote about rural Mexico. He mentions that the book was published in 1955 and was one of procurers of “magical realism”, which influenced many of Latin America’s best authors.

When I told my Guatemalan wife about the book, she told me she “hated it.” Evidently, the Belgium nuns who ran her school in Guatemala made this obligatory reading in 6th grade! Oh well, obviously I got a late start to catching this great piece of literature, but was not disappointed one bit.

According to Susan Sontag, an American writer, filmmaker, philosopher, teacher, and political activist described as “one of the most influential critics of her generation,” who wrote the foreword to the book, Garcia Marques said that “Pedro Páramo ” is a legendary book by a writer who became a legend.

The story is about a dying mother beseeching her son to locate his father, Pedro Paramo, whom they fled from years ago With that, Juan Preciado sets out for Comala, a town alive with whispers and shadows – seemingly populated only by memories and hallucinations. Built on the tyranny of the Páramo family, its barren and broken-down streets echo the voices of tormented spirits sharing the secrets of the past.

His only love, from a very young age, is that of Susana San Juan, a childhood friend who leaves Comala with her father at a young age. Pedro Páramo bases all of his decisions on, and puts all of his attention into trying to get Susana San Juan to return to Comala. When she finally does, Pedro makes her his, but she constantly mourns her dead husband Florencio and spends her time sleeping and dreaming about him. Pedro realizes that Susana San Juan belongs to a different world that he will never understand.

When his only love, Susan San Juan, died, the church bells toll incessantly, provoking a fiesta in Comala. Pedro buries his only true love, and angry at the indifference of the town, swears vengeance. As the most politically and economically influential person in the town, Pedro crosses his arms and refuses to continue working, and the town dies of hunger. This is why in Juan’s narration, we see a dead, dry Comala instead of the luscious place it was when Pedro Páramo was a boy.

The local priest provides insights into the black cloud that seemed to hang over Pedro.

“It had begun, he thought, when Pedro Páramo, from the low thing he was, made something of himself. He flourished like a weed. And the worst of it was that I made it all possible.” He tells of one of his parishioners confessing her sins, “I have sinned padre. I bore Pedro Páramo’s child…”

The priest remembered the day he brought the child to Pedro Páramo, only hours old. He had said to him:

Don Pedro, the mother died as she gave birth to this baby. She said that he’s yours. Here he is.

“Why don’t you keep him, Father? Make a priest out of him. With the blood he carries in his veins, I don’t want to take responsibility.”

Father Rentería lived in hope that he would someday be able to fully fulfill his vows as a Catholic priest and tell Pedro that his son (Miguel, who was killed in a horse related accident) will not go to heaven, but instead, pardoned him for his sins in exchange for a lump of gold because he is too poor to survive otherwise.

The author describes what Pedro’s son, Preciado, finds one evening in Comala,

….Nights around here are filled with ghosts. You should see all the spirits walking through the streets. As soon as it’s dark they begin to come out. No one likes to see them. There’s so many of them and so few of us that we don’t even make the effort to pray for them anymore to help them out of their purgatory. We don’t have enough prayers to go around. Maybe a few words of the Lord’s Prayer for each one. But that’s not going to do them any good. Then there are our sins on top of theirs. None of us still living is in God’s grace….

Sometimes the order and nature of events that occur in the work are not as they first seem. Midway through the book, the original chronology is subverted when the reader finds out that much of what has preceded was a flashback to an earlier time.

Initially, the novel received a cold critical reception and only sold two thousand copies during its first four years until it was highly acclaimed as a key influence on Latin American writers like Gabriel Garcia Marquez. Marquez claimed that after he discovered Pedro Páramo (with Kafka’s “Metamorphosis” the most influencing reading of his early writing years), he could recite from memory long passages, until eventually he knew the whole book by heart, so much did he admire it and want to be saturated by it.

Marquez also revealed that he felt blocked as a novelist after writing his first four books and that it was only his life-changing discovery of Pedro Páramo in 1961 that opened his way to the composition of his masterpiece, “One Hundred Years of Solitude.” Jorge Luis Borges considered “Pedro Páramo to be one of the greatest texts written in any language. Evidently, it has been translated into 30 different languages, and the English version has sold over one million copies in the U.S. According to “WorldCat” the World’s largest network of library content and services, his works have been published in 40 languages.

Juan Rulfo was a Mexican novelist, short story writer, and also a photographer. He is acknowledged mainly for two books. One of which is El llano en llamas (1953), a collection of short stories. Fifteen of these stories have been translated into English and appeared in The Burning Plain and Other Stories, which also includes his much-famed tale, Diles que no me maten! (Tell Them Not to Kill Me!). The second book is the novel, Pedro Páramo (1955), after which Rulfo did not write another novel. His photography works are archived at the Juan Rulfo Foundation, which bears more than 6,000 negatives of his photographs.