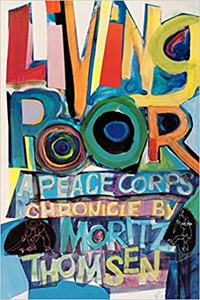 This would be Moritz’s first and best known book, about his volunteer work in tropical Ecuador, where despite language and cultural barriers and a serious fatalism amongst the local population, he pushed ahead with a series of projects which would impact him and his village in ways he couldn’t imagine.

As a Peace Corps Volunteer he put down roots, which allowed him to immerse himself in the local culture and economy and understand its dynamics like few other ex-pats. This allowed him to enter the skin and psyche of his neighbors and describe their passions and ignorance with immense candor. As fellow Returned Peace Corps Volunteer and author, Paul Theroux, puts it, “Thomsen is one of those rare, gifted, inventive and courageous Americans with a strong stomach and a dark sense of humor, who went away and never came back—just kept going.”

His writing would also have a profound impact on those who met him and read his books. I was one of those ex-pats, as I’d experienced similar challenges as a Peace Corps Volunteer in Guatemala shortly after Moritz’s stint. Moritz was correct in describing the training program a “deselection process” and that it was “not to change your character but to discover it, not to toughen you up or to implant proper motivations for Peace Corps service but to find out what your motivations were…” In my initial weeks as a volunteer, I could commiserate with Moritz’s observations, “As for the depression, I figured that it was a normal reaction to living among the very poor.”

Moritz’s humorous comments about how he butchered his newly learned language was also easy to identify with—the locals had many a good laugh at my misuse of basic, everyday phrases. “Up to a point it was true; in no time at all I could express the fundamentals. To me it was very friendly and rich this fish them,” I would say in impeccable Spanish, receiving a dazed smile of appreciation from my hostess.”

I could also identify with Moritz’s assessment of his initial two-year stint, “…it seemed that in the first two years I had accomplished nothing, that it had been “por gusto.” “I thought of sad Rio Verde…it was just as screwed up now as it had been a year and a half earlier when I arrived. I woke up early one morning and lay there wide awake, impaled on those terrible 3:00 a.m. horrors, sinking deeper and deeper into depression.” Moritz never minced his words and explored the dark side of life and one’s inner feelings and reactions to what he experienced in tropical Ecuador.

Moritz was constantly told that “the coastal people were the laziest, most worthless people in the world and that no one would ever be able to help them. I had been listening to this sort of trash, 90 percent racial, all my life, and it didn’t much impress me…” I faced similar comments about the Maya Indians in the highlands of Guatemala, and these underlying prejudices would go a long way in explaining both countries’ poverty.

We’re introduced to a poor zambo, or beach bum, Ramon Prado, at the beginning of the book and one memorable scene is when Ramon and Moritz sit eating oranges and talking by candlelight on a night of profound darkness. He speaks so naturally, so sweetly, that for a second the room actually blazes with light when Ramon says, “I think you’re a good man; let’s be brothers.” To which Moritz responded, “Yes, let’s be brothers.” Ramon would play a prominent role in Moritz’s life and, therefore, his literary work.

In contrast to his upbringing in a wealthy family in Seattle, Moritz chose to experience and understand poverty. “Living poor is like being sentenced to exist in a stormy sea in a battered canoe, requiring all your strength simply to keep afloat; there is never any question of reaching a destination. True poverty is a state of perpetual crisis, and one wave just a little bigger, or coming from an unexpected direction, can, and usually does, wreck things.”

The book ends with a dramatic scene when Moritz is leaving Rio Verde and says good-bye to Ramon’s wife, Ester, “and everything was under control, everything like a dream. But as I stepped down off the porch to leave, Ester screamed, and I turned to see her, her face contorted and the tears streaming down her cheeks. We hugged each other, and Ramon rushed from the house and stood on the brow of the hill looking down intently into the town.”

Moritz would send his stories on a regular basis to the San Francisco Chronicle, at first rejected by the publisher, eventually published and compiled into his best known work, Living Poor, published by Washington University Press in 1969. The book would go on to sell over 100,000 copies and was a basic part of Peace Corps Volunteer orientation for Ecuador.

Moritz Thomsen was destined to be more fully appreciated posthumously—next year will be the 50th anniversary of the publication of his first book, Living Poor. Several scholarly studies affirm and confirm the idea, widespread among his fans that Moritz Thomsen is one of the most important, but least known, American writers of the twentieth century, and this book is only the first of four remarkable books, which have been compared with the works of Thoreau and Joseph Conrad. So once you’ve read this book, I highly recommend you move on to “The Farm on the River of Emeralds,” although my total favorite, is “The Saddest Pleasure.”

As a Peace Corps Volunteer, reviewer Mark Walker implemented fertilizer experiments in Guatemala and Honduras, although his most important accomplishment was his marriage to his wife, and their three children, all born in Guatemala.

His involvement promoting “World Community Service” programs led to his receiving the most prestigious Service Above Self Award from the Rotary International Foundation. His memoir, Different Latitudes: My Life in the Peace Corps and Beyond” won Honorable Mention in the Arizona Literary Award competition. He’s published various articles, including, “The Fundraiser: Running Risks in the Nepal and Bolivia,” in the Spring, 2018 edition of World View, a featured article, “The Making of the Kingdom of Mescal: An Adult Indian Fairy-Tale,” in the Spring, 2018 of the Revue Magazine as well as an article with the same title of his book in the Summer 2017 issue of Advancing Philanthropy. Mark and his wife, Ligia, live in Scottsdale, Arizona close to their three children and seven grandchildren.